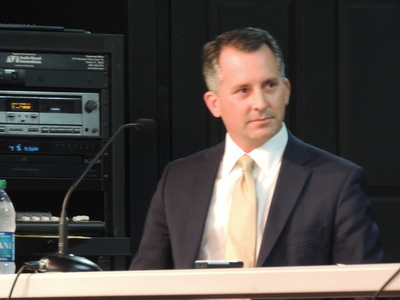 “I continue to study and build out infrastructure for a potential independent run for governor,” said Jolly during an interview on WMNF’s MidPoint on June 30. “Polling does continue to come in in the low 20s as an independent candidate. That’s not enough to get us there. I’m not interested in running a spoiler race.”

Jolly, a former Republican and now a contributor on MSNBC, CNN and other news outlets, said he will make a decision in consultation with his wife around the holidays.

“Timing is very important,” he said, noting that before the Jan. 6 attack on the Capitol, consultants told him running for Florida governor as an independent wasn’t even worth considering.

“Jan. 6 happened and we saw a dramatic acceleration in the interest in independent party politics. Nobody’s hoping for another January 6. But who knows what else happens?” he said.

Governor Ron DeSantis, he said, is popular in some circles, but “there may be some press exposures that paint him in a different light going into November.”

“So what are Democrats doing differently that would allow them to elect a Democratic  governor in the state of Florida? I’m not optimistic they can pull it off. So maybe something emerges in the field that creates a pathway for an independent candidate.”

Jolly said he expects an inflection point in November.

For now, he’s busy as the chairman of the Serve America Movement, also known as SAM, a new political party that aims to attract moderate voters and disrupt the two-party system.

SAM has been an official political party in New York since 2018. Last week, SAM added Texas, Pennsylvania and Connecticut to its roster. A handful of additional states are in the queue, including Florida and California. SAM anticipates running candidates in 2022.

SAM’s platform doesn’t include issues like immigration, health care or gun laws. The party, instead, focuses on electoral reform and transparency.

“We fundamentally embrace dramatic reform to unrig today’s election system, from ranked choice voting to open primaries to gerrymandering reform,” he said. “The idea is to level the playing field for all candidates, but also for all voters. Let’s let the most number of voters have access to the ballot.”