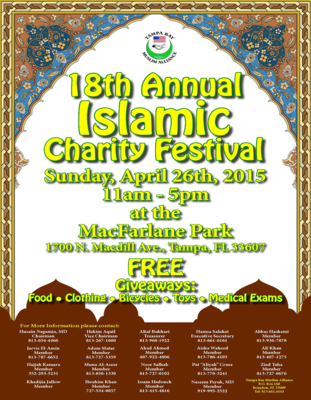 Today on Radioactivity we have Hakim Aquil and Dr. Husain Nagamia of the Tampa Bay Muslim Alliance, which is organizing the 18th annual Islamic Charity Festival at Macfarlane Park on Sunday April 26th from 11am-5pm. The festival will offer free medical services, food, clothing, and 2000 bicycles with helmets,lights and locks. Charity in Islam, known as Zakat, is one of the 5 principles considered essential to muslims.

We then get listener responses to the Legislative deadlock over medicaid expansion and a Tampa Bay Times report which revealed that Tampa Police heavily cited African-Americans with bicycle violations. Tampa Police Chief Jane Castor responded to the story in a Times editorial yesterday.