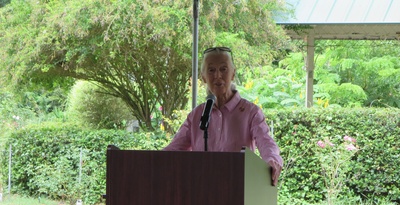 A scientist famous for studying primates is speaking Tuesday night at the University of South Florida in Tampa. But Tuesday morning elementary students were treated to a surprise talk from Jane Goodall at USF’s Botanical Gardens. Goodall emphasized the importance of naturalists and scientists and protecting the Everglades, but first she started off with an ape greeting.

More than 100 children and USF students gathered under the shade of a sprawling oak tree to hear Jane Goodall speak. Goodall has been studying chimpanzees in Africa for more than 40 years. Due in part to her concern about declining ape habitats she has become an outspoken environmentalist. She is worried but optimistic about the future of the Everglades.

The elementary children take part year round in Goodall’s Roots and Shoots program. It’s a youth-led program that encourages a hands-on learning experience to promote scientific literacy. Goodall said encouraging children to remain positive about the future is an obligation we all share.

Goodall thinks leading by example could bring and end to circuses which still use captive animals in their shows.

Jane Goodall is the latest in a series of high profile scientists and intellectuals to speak at USF. Eric Eisenberg, the Dean of Arts and Sciences, realizes the importance of having Jane Goodall in the Tampa area.

The Jane Goodall lecture is at 7:00 p.m. Tuesday night in the Sun Dome on the USF Tampa campus.