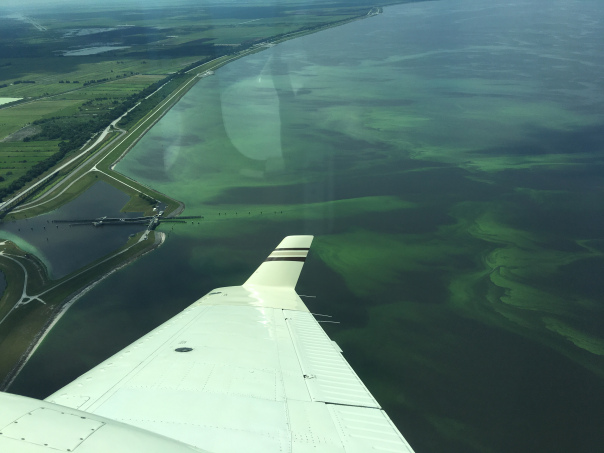 Because of recent heavy rains, huge algae blooms from polluted Lake Okeechobee are once again racing toward Florida’s west and east coast as water is released from the quickly-filling lake. Jacqui Thurlow-Lippisch is the former mayor of Sewell’s Point, near where the St. Lucie River empties into the Atlantic Ocean. WMNF News spoke with her Tuesday about the algae bloom she photographed from an airplane on Sunday in Lake Okeechobee and in the waterways leading to the Gulf and the Atlantic.

We talked about what happens to the algae when water is released from Lake O, how far the algae bloom has already reached and how this algae bloom compares to previous ones that spread to the coasts.

“We’re really in a toxic algae crisis again. On June 1st the Army Corps [of Engineers] started to release from Lake Okeechobee into our river from the lake. … It gets that really bright green that’s almost iridescent. It looks like fluorescent paint, almost; it looks fake.”

What do you know about discharges from Lake Okeechobee into the St. Lucie and into the Caloosahatchee [Rivers] recently?

“[Monday] evening at about 10:45 p.m. the Army Corps started discharging again into the St. Lucie River from S-308 at Lake Okeechobee. And I know that the day prior to that they started dumping from S-80. Over the weekend there were two days that were zero releasing [no water relased from the lake] and then they started releasing again on Monday. First it was from C-44 and now it’s from S-308, which is the structure at the lake. So, they are releasing [water].”

The Fort Meyers News-Press wrote Tuesday that the algae bloom has caused the closure of a beach on the Caloosahatchee River.