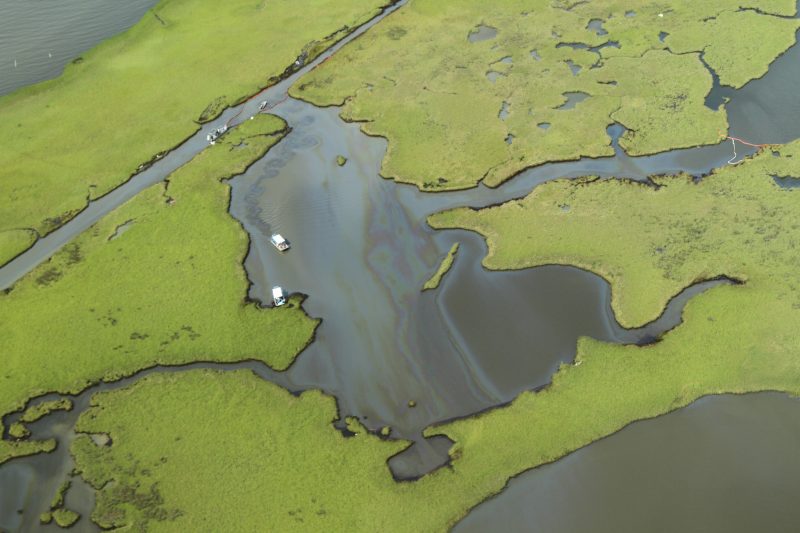 There’s another medium-sized oil spill in the Gulf of Mexico region – this time it’s impacting water and wetlands in Barataria Bay, south of New Orleans. Scott Eustis is coastal wetlands specialist at Gulf Restoration Network and flew over the spill on Wednesday. WMNF News spoke with him by phone Thursday afternoon.

Hilcorp Energy estimates that up to 4,200 gallons of oil spilled and affected about 8 square miles. 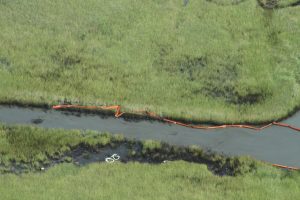 “This spill was initiated, somehow, by a company out of Dallas: Hilcorp. They busted a very old oil pipeline in the marshes of Louisiana [on] Monday. While the investigation is ongoing, we at Gulf Restoration Network have been interested in this company, Hilcorp, for a time because they have been flaunting the Coastal Use law. They have been dredging through our wetlands without permits; running barges, that normally need 8-feet of draft through 6-feet of water, kind of ripping up the water bottoms in their hunt for oil. Although, I don’t know if that’s the cause of this pipeline breach, sometimes that leads to digging up some of these old pipelines and causing spills. When you’re not careful with how you move through the wetlands–because there’s been oil extraction in Louisiana for decades–you’ll run into these old pipes that bust.

“What we saw when we flew out of the New Orleans area, a half-hour to the northern Barataria Bay wetlands. It’s an area that’s, unfortunately, very familiar, just because it’s an area that was very heavily oiled during the BP disaster. It’s an important marsh area for storm surge protection for New Orleans. It’s an important marsh area because it’s a nursery area for shrimp, crabs and it’s also a place where a lot of oyster production goes on. It’s also a place where there’s a lot of dolphins and we saw a lot of dolphins die in Barataria Bay, through the BP disaster. So, we’re very sensitive, already, about this area.

“When we flew over it, we saw the pipeline canal covered in black. We saw the green marshes of northern Barataria Bay. We saw spartina grasses covered in a thick, black oil, which spells doom for the marshes. The way oil can destroy marshes is by just totally smothering the grasses and keeping oxygen from their roots and it looked like that was going on. We know from the color black, that there’s a lot of oil on these marshes and that was hard to see. The oil looked like it had leaked all over the canal and spread into the marshes. Kind of like if the marsh grasses were eyelashes and the oil were mascara–an application of toxic mascara across the marshes–sometimes, making whole areas, like the size of living rooms–there’s a couple areas like the size of a living room–that are just totally black. Those places will probably turn to open water very soon.

“We’re documenting it and putting imagery out there so that people put pressure on Hilcorp to assess what ecological damages.

“We have thousands of spills in the Gulf of Mexico, in Louisiana and Texas and offshore, every year. This is one of the bigger ones. We had that Shell spill, offshore–very big–but, we’re unsure if Shell is going to have to do what’s called a Natural Resource Damage Assessment. Under the Oil Spill Pollution Act of the United States, they’re supposed to count how many dolphins that oil kills, how many birds died because of that oil and then fund ecological restoration to bring us back to “zero”, right? We have a huge, what’s called a NRDA damage assessment restoration program for Deepwater Horizon and that includes wetland restoration areas, in this area where we saw the spill happen, while I was in the air yesterday.

“I was out there today, as well, watching the Coast Guard and other Louisiana state agencies respond to the oil, which means that they’re out there in airboats and small jon boats with skimmers, skimming up what oil is recoverable, with “boom” which is absorbent cloth and big absorbent pads, trying to soak up the black gunk out of the water, as much as possible. So, they were there, on the water, and they had airguns going off, so it’s like a propane tank that just makes a really loud sound, like “pop” and it hurts your ears if you’re too close and that’s to scare any birds away from the oil site. So, we did see plenty of terns and herons and other coastal birds, that normally use the marshes as their home.

Do you know if during the clean-up effort, anyone is using dispersants like Corexit?

“That’s a big question. They’re not supposed to be doing that. When we flew over yesterday, we did see spraying, so we were very curious after that. But, I think they were just spraying to, called ‘levage‘ where they wash the marsh with the oil. So, they weren’t spraying from a Corexit tent. We do have concerns–always–that the companies will use dispersants and they could do it at night, when we can’t watch. I do think if you ask any agency they would say that there’s not dispersant use. If you ask a lot of people who work in the oil-response business, they’ll respond that it’s still being used. I haven’t seen any use of dispersant myself.”

This occurred, you believe, from an old abandoned oil line. How big of a problem are these abandoned lines?

“There are thousands of abandoned wells in the Louisiana coast and a large number of abandoned lines-we don’t quite know how many there are or how big of a problem it is. I think if we go back to kind of what I was saying in the beginning: if you’re a company that does not take care in how you operate on the coast–and unfortunately that’s most of them–you can operate a boat and run into a line. If you’re not careful and you just say: “Oh well, I can run this tugboat through that shallow water, that’s not a problem.” And you force your way through with your engines, you might end up running into some of this old infrastructure.

“This is the Lake Washington field. It’s been an oil field for a very long time, probably since just after WWII. During those days a lot of things went undocumented. If Hilcorp, I think, were a better company, they would have done a better sight survey from the beginning, they would have realized that this pipeline was part of their system before they had to work around it, but, they didn’t and now we’re in this mess.”

Hilcorp has estimated that this spill is about 4,200 gallons–up to that amount–and has affected about 8-square miles of the Gulf and this bay. Are those numbers that you’re comfortable with?

“That would make it one of the largest spills. It was pretty big. That’s based on an aerial flyover, rather than any measurement coming out of a pipeline. They don’t have a gauge on the pipeline measuring that volume, that number comes from a pilot, hired by the company, to fly over the site and give an aerial estimate, which is a very squishy kind of number.

“The photos that we saw, from Tuesday, were brown oil all over northern Barataria Bay, which are very concerning. We had a couple of storms and we did not see oil spread over that kind of large of an area, when we flew over Wednesday or today when we were out on the water. So, either that oil was dispersed and disseminated by the storms that came through in the last couple of days or it washed up all in the marsh, like we saw. A shorter answer is: although that’s a very squishy number, I think it’s the best one we’re going to get.”

Those are my only questions, is there anything else that I didn’t ask?

“We started … in Louisiana, we’ve started funding our restoration program, which is the wetlands restoration needed to keep New Orleans afloat, in the face of sea-level rise. We have, in New Orleans, one of the biggest deltas on the continent and maybe the world. That’s what we have, in terms of storm protection and after [Hurricane] Katrina the state has done a lot to initiate restoration and we’ve really, in the past couple of years, especially with the money from this BP settlement, really started to build a lot of new land. But, we still don’t have all the money we need to make New Orleans sustainable and keep it afloat. This company spilling this oil–and they spilled it in an area that we’re trying to restore-so, I really hope the federal government and state agencies take every action they can to hold this company accountable and make them restore the wetlands that they oiled.”

WMNF News coverage of the Shell oil spill in May – http://www.wmnf.org/update-shell-oil-spill-gulf-mexico/