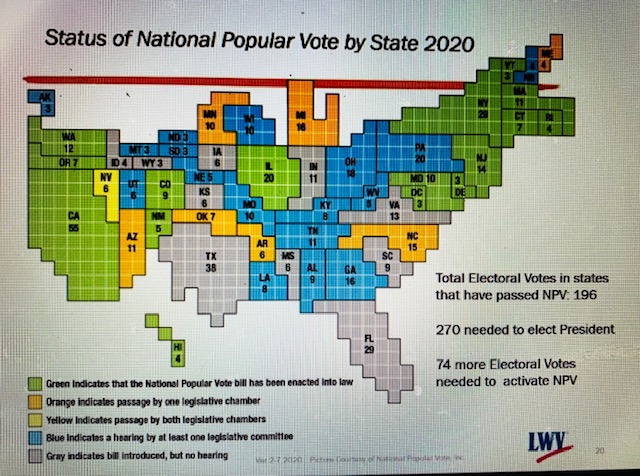 With Election Day just around the corner, the Florida League of Women Voters on Tuesday hosted a forum on the Interstate Voting Compact, which would ensure the president of the United States is elected by national popular vote.

Advocates in the national popular vote movement support an agreement among states to award all of a state’s electors to the presidential candidate who receives the most votes nationwide. This approach aligns with the U.S. Constitution, which mandates that the Electoral College choose the president, but gives states the right to determine how those electors cast their votes.

Called the Interstate Voting Compact, the arrangement would only go into effect after states representing 270 electoral votes, the number needed to win the presidency, have agreed  to join the compact. This would prevent a candidate who loses the popular vote from winning the presidency, which is what happened in 2016 when Donald Trump received 2.9 million fewer votes than Hillary Clinton but still won enough electoral votes to become president.

During a forum sponsored by the Florida League of Women Voters, Kathleen Crampton, chair of Floridians for National Popular Vote, said the compact is a simple way to reform the Electoral College.

“It works within the electoral college, preserving the tradition, and most importantly it doesn’t require a constitutional amendment,” she said.

So far, 15 states and the District of Columbia, representing 196 electoral votes,  have passed bills pledging to the compact. A bill introduced in Florida’s last legislative session got no traction. Crampton said her organization hopes to have a bill introduced again next year.

“Everyone thinks after Nov. 3 we can all relax and the election’s over. For those of us in National Popular Vote, we’re just gearing up because our focus will be on what goes on in Tallahassee.”

Rep. Anna Eskamani of Orange County was among the lawmakers who co-sponsored the bill last year.

“Every other election in our state is dictated by the popular vote so I think that for a lot of Floridians it’s a process that is common sense and balanced,” Eskamani said. “The next legislative session might bring another opportunity to pursue the Interstate Compact. in the meanwhile, make sure you vote. Please exercise your democratic right and let’s get it done.”