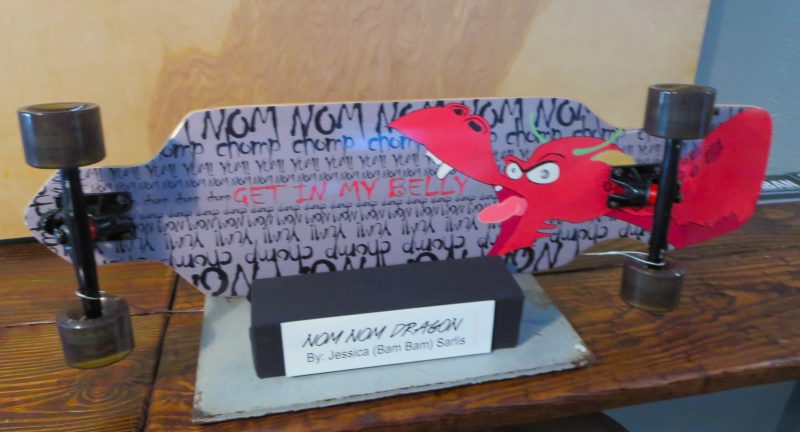 What do small business, local art scene, and skateboarding have in common? Breezy Boards. St.Pete entrepreneur taps into into the city’s art scene one skateboard at a time.

Breezy is a USF grad and avid longboard skater. Now in her mid twenties, Breezy has been skating longboards since she was 10. 5 days after graduating USF, she launched her dream, of a custom skateboard business. She said her aim is to be a local facilitator as well as a business woman.

“(to) give local artist a platform to get their names out there; and kind of give them the exposure that all these other bigger named artists get. (Those) who already have a little bit of traction. I wanted to be like; ‘oh, this artist works right down the street at this bar. Or, right down the street at this tattoo shop.’ That’s really resonated with people, because they either want it to be representative of their esthetics and what they like. Or, something that they believe in. And I was kind of hoping to hit that by hosting this artwork collection.”

Breezy started her outreach to local artists at the same time she started her Breezyboards company. Her first concept was called Adjective Dragon. Artists were to use an adjective to describe a dragon and then paint that on the skateboard. A couple of weeks ago Breezy had a showing of the 5 winning boards in St. Petersburg. Displaying usable art seems like Bauhaus all over again. Breezy said this is part of skateboarding history.

“Artwork on the bottom of a skateboard; that’s kind of an iconic thing. In the 80’s there were all these cool-hip pool decks that people sought after; because of how unique and interesting and clever those artistic designs were. I really wanted to tap into the people that, like I mentioned, don’t really have that huge blowup exposure. But like to create and love what they do, and were into the idea of people skating around with artwork-design on the bottom of the decks.”

Some of the artists were at the event. Jessica Sarlis, better known as Bam Bam on the Roller Derby circuit, was one of the winners. Jessica is a classically trained artist as well as an interior designer. She said a combination of artistic ideals and work experience appealed to her skateboard art.

“I like utilitarian art. I like morphing things to do something else. Well, I do that a lot in graphic design but I do it mostly in interior design now; owning my own company. I try to get people to understand that this house doesn’t have to stay looking like this. It can be utilized and recreated to be something else; and more towards their personalities, more towards their liking. Because homes do take a personality of their own.”

Sarlis said the esthetic of taking mistakes and making them features, molded her approach to designing art for the skateboard.

“I like to call them happy accidents. With any kind of art, you could be thinking it’s going to be going one way, then all of a sudden you did something: a funky line or a brushstroke. And then it takes a completely different turn. Then you’re like; ‘Oh my God, it could look like this or do this.’ When she (Breezy) was as simple as working and cleaning up she thought of Adjective Dragon. I was not just going to think of the idea of what the dragon could be doing, but maybe words that represent the same thing. Almost like some of the original Pop Art; where is was words on a canvas as opposed to an actual painting. So the words would describe it as opposed to an icon or image.”

Breezy is upbeat, optimistic and ready willing an able to discuss the future of her skateboard company.

“I’m going to be working to create this art exhibit display package with a little bit of information about it: a title, the artist’s name. It would really just be kind of a look into the collection as art as a hanging display.”