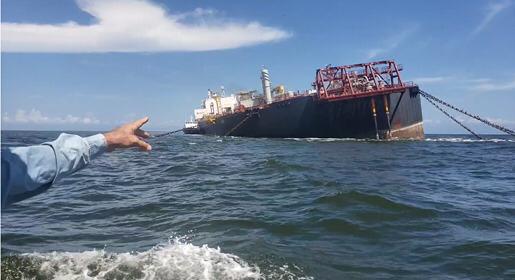 The United States embassy in Trinidad and Tobago Friday called on the Venezuelan government to take action as state-flagged FSO Nabarima continues its apparent three-month-long capsize into the Gulf of Paria.

Locals fear the derelict vessel is about to dump its near 55 million gallons of oil right at the mouth of the Caribbean Sea.

With his thick Trini accent, Gary Aboud doesn’t mix words when he talks about what’s at risk.

“If it goes down we are all f-a-c-k-e-d. There’s no nice way to say what will happen to us. Because 1.3 million barrels in an enclosed shallow, basin of water can only spell doom and gloom.”

The 60-year-old native of Trinidad and Tobago has been fishing the Gulf of Paria’s waters for most of his life. And for the past three months, he’s been watching the abandoned Floating Storage and Offload unit list further and more drastically into the water by the day.

“It’s an accident that’s happening in slow motion,” he said. “It’s very clear that the vessel is in trouble. There’s no doubt.”

The FSO Nabarima sails under the Venezuelan flag and has a capacity of 1.4 million barrels of oil. Records show its capacity was last listed at 1.3 million barrels or about 54.6 million gallons. It’s owned in part by the state-owned energy company PDVSA and Italian oil company ENI. The vessel was abandoned near capacity when U.S. sanctions prevented Citgo from purchasing the oil in early 2019, according to Reuters.

For nearly two years, the oil-filled vessel has sat mostly ignored as it deteriorates into the sea.

By comparison, the Nabarima holds about five times as much oil as the Exxon Valdez spilled into the Prince William Sound.

Aboud is a founder and spokesperson for the Trinidadian advocacy group Fishermen and Friends of the sea. Aboud said they were first concerned when they noticed a 5-degree lean. He went to check Nabarima’s condition himself after the Venezuelan government issued a statement saying the vessel was stable and the list was being righted.

Friday, he noted its lean was now near 25 degrees.

“Even yesterday when we were on the high seas risking life and limb to go to the vessel to confirm the safety and stability of the vessel, the Venezuelan government put out a release and our government here in Trinidad mimicked it, that the vessel is stable and everything is okay and the tilt has been corrected,” Aboud said.

Video Aboud provided to WMNF shows him in a small boat near the bow of the almost 900-foot-long Nabarima. The ship lists drastically to the starboard, or right side, as a few chains near its bow anchor the ship in place.

“If the top soil moves because of the weight of the water in the vessel or because of any special or extreme tidal movement – bad weather – we think the vessel will flip.”

The U.S. Embassy in Trinidad and Tobago called on Venezuela to take action Friday.

In a statement, the embassy said, “The United States remains concerned by the potential risk to safety and environment posed by the Venezuelan-flagged vessel, Nabarima, in the Gulf of Paria. We strongly support immediate actions to bring the Nabarima up to international safety standards and avoid possible environmental harm, which could negatively impact not only the Venezuelan people but also those in nearby countries.  PdVSA has a responsibility to take action to avoid an environmental disaster in Venezuelan waters.”

The Gulf of Paria is a shallow inlet between Trinidad and the western coast of Venezuela. It opens into the south Caribbean Sea. The Caribbean Current sends waters northwestward and into the Gulf of Mexico meaning 55 million gallons of crude oil wouldn’t necessarily be an isolated problem.

“We’re concerned about the natural history of the area, about the human communities that depend on the ecosystem and a healthy ecosystem,” Aboud said. “About the threatened, endemic, endangered species. And there’s all the industries, the tourism and industrial sectors. Everything is connected here.”

The Florida Department of Environmental Protection and the Coast Guard did not respond to multiple requests for comment.