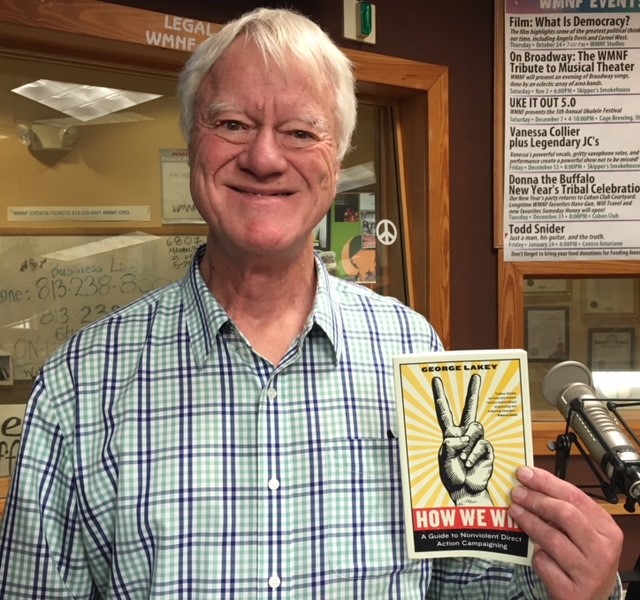 Non-violence was used successfully in the last 70 years to achieve social change around the world and here in the US from Indian Independence, to the end of apartheid in South Africa to the US Civil Rights Movement to the fall of the Berlin Wall.

Is non-violence still relevant in an era where hate crimes are on the rise, where far right groups which practice violence and armed militias are organizing in the US? Where the mechanisms of government are largely beholden to the wealthy and to corporate interests which buy elections, push legislation, and back candidates who are responsive to elites?

We’re joined now by a veteran peace and civil rights activist George Lakey. Lakey’s written a new book called HOW WE WIN: A GUIDE TO NON-VIOLENT DIRECT ACTION CAMPAIGNING (Melville House Publishing). Lakey will be holding a workshop at the Friends Meeting House in St. Petersburg tonight at 6PM.

Lakey has been an activist since the age of 12. He was involved in the Ban the Bomb movement against nuclear weapons in the 1950’s. He was arrested at a civil rights protest in Chester, Pennsylvania in 1963. He worked on Freedom Summer in Mississippi in 1964. He oppose the Vietnam War—at one point sailing a ship filled with supplies to North Vietnam. And he came out as a gay man in 1973—joining the LGBT movement.

He’s taught at the University of Pennsylvania, Haverford College and Temple University. Until his retirement he was a professor at Swarthmore College.

Among his other books: VIKING ECONOMICS.