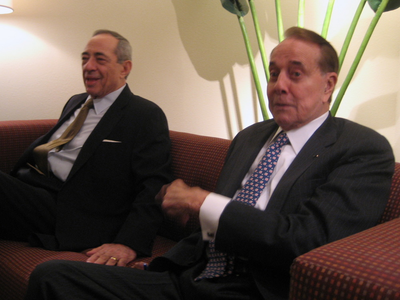 Here is a conversation WMNF had with Dole and former New York Governor Mario Cuomo (yes, the father of Andrew and Chris Cuomo, who are also in the headlines this week) in Sarasota in March, 2008:

Cuomo said he was staying neutral in the Democratic race for president by not endorsing either candidate. He referenced a poll saying nearly 30 percent of each candidate’s supporters will not vote for the other candidate in the general election. Cuomo said he has written an opnion piece he hopes will appear in the Boston Globe in the next few days. It will call for two possibilities, each one involving a combined ticket with both Barack Obama and Hillary Clinton.

“Sit down, right away, [Barack] Obama and Hillary [Clinton]. You say you can negotiate, you say you can be a president; you say you can deal with the Congress, that means you can negotiate. Sit down and decide this thing and make one of you president and one of you vice president, and make a deal. And if you come out of that room and tell us, well, you don’t want to do it because vice president is not good enough for you, well then we’re going to use that and judge you. So that’s one. Or number two, if you want to go ahead all through the fight of the convention, etc., creating animosity, letting the Republicans get stronger, at least agree between you that the one who wins will, of course become president, and the other one will accept the vice presidency.”

Dole: “But not openly?” Cuomo: “Yeah, no, I’d do it openly. Just sit down and say we’re going to go right to the end. Hillary says I think I’m going to win, I’ll catch up with Pennsylvania, etc., etc. and I’ll have enough votes. And Obama says no, no you won’t, I will. Well, OK, get that done, but agree to this: whoever loses will serve as vice president.”

WMNF asked Cuomo whether he thought either candidate would be receptive to his idea. Both Cuomo and Dole responded.

Cuomo: “What I like about my idea is if they’re not receptive, they’re going to have to explain why not.”

Cuomo: “Everybody says she wouldn’t but it remains to be seen what happens if you make an issue of this.”

Cuomo said that there are many more critical issues during this year than in recent election seasons, and that is one reason why Obama’s message of change resonates with many voters. Cuomo called Obama the greatest political speaker he has ever heard.

The Ringling College Library Association’s Town Hall lecture series will resume in January 2009. The highlight of next season is Nobel Peace Prize winner and former Soviet Union President Mikhail Gorbachev, who will speak on March 23.