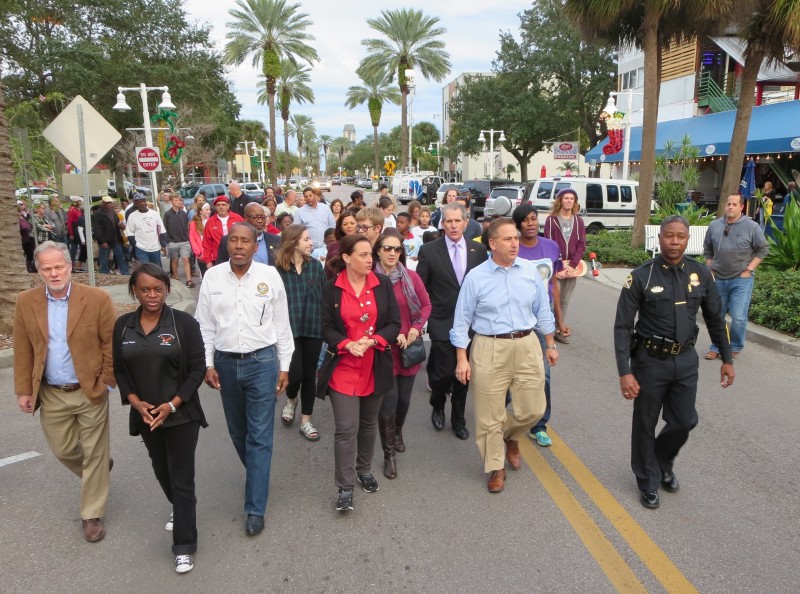 Saint Petersburg Mayor Rick Kriseman urges for citywide unity during a march against gun violence. Last Friday at 5pm the mayor led 200 or so people from police headquarters down Central Avenue. The mayor wants all hands on deck to tackle gun violence throughout the city.

The march comes on the heels of six shooting deaths in Saint Petersburg over the past six weeks. Central Avenue was chosen to march in order to highlight that gun violence happens both north and south of the midpoint. Mayor Rick Kriseman insisted everyone needs to do their part to curb gun violence.

The group came to a halt in front of the “Love Your Neighborhood” mural at 22nd Street and First Avenue South. Kriseman addressed the crowd for roughly 10 minutes as he stood on small crate. He implored the citizens, political and community leaders to speak up and report illegal behavior. Kriseman said communication is the key.

>“If you know somebody that has a gun that shouldn’t have it, (then) encourage them to turn it in. There are amnesty programs. We don’t want to prosecute them. We just want their gun off the street. If you know someone that’s committed a crime and you don’t speak out about it – and someone got hurt – (then) you’re letting that person potentially hurt someone else. That’s not what we need in this community. We have to talk. We have to communicate. We have to be willing to help each other. That means you got to be willing to speak out.”

The calls to end gun violence in the city come, as police search for Abrion Witcher, a suspect in the December 15th death of Gabriel Wallace.