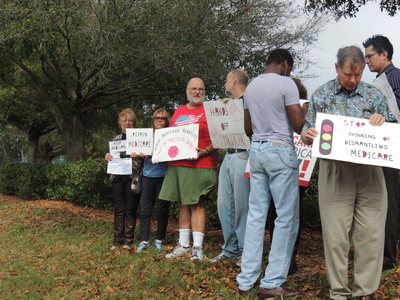 Supporters of Medicare, Medicaid and the Affordable Care Act are speaking out to try to save the healthcare programs from a united Republican front in Congress and the new Trump administration; Tuesday morning about a dozen people took their message to the Tampa office of U.S. Senator Marco Rubio. Tampa resident Delores Grayson is a volunteer with the group Organize Now. She has a preexisting heart condition and has had open-heart surgery. Grayson is 70 years old and retired after working and paying in to Medicare and Social Security for 39 years and is concerned that she won’t be able to afford premiums if proposals to privatize Medicare and change it to a voucher system for private insurance pass in Washington, D.C.

“We were out there at Marco Rubio’s office–in front of his office–letting people know how much Medicare and Medicaid, our healthcare means to us and how we feel if it’s taken away from us – let the public know.

“We went into his office and we spoke with his secretary to let her know our personal story; let her know ‘Hey, it’s very important that we keep our Medicare.’ Because, like for me, for instance, for my heart surgery, it doesn’t stop there with the surgery. I continue to take medication for the rest of my life that costs money and by me being on a fixed income, I wouldn’t be able to afford that medication if they take that healthcare away from me, if I pay their Social Security premium for Medicare.”

“Well, if they change or take it away, well then I’ll have to pay for my own office visits, which some of the insurance pays for; my medication now: I got medication that costs $300, $400, $500. I can’t afford that when I’m on a fixed income.

“My primary care office visits and heart specialists: it costs to go see these doctors and I only have a $35 co-pay and I can afford it. But, if they take the healthcare away, I can’t afford $150 every time I agree to go to these visits. Every 3-months I have to follow-up because I have the coronary artery disease and it has to be monitored with the medication that I’m taking.”

Can you tell me how many other people joined you in your demonstration today?

There’s talk of changing Medicare from how it is now, to actually giving people a credit so they can buy private insurance. How would that affect you?

“Well, that depends on what type of private insurance you need. Right now I pay Medicare $110 a month, to be sure I can go to these different doctors. But, if it continues being high, where I can’t afford, I wouldn’t be able to do it. Because I’m on a fixed income. I only receive Social Security now. I’m not like working. I’m retired. But, I worked for 39 years paying into the different Medicare and Medicaid for people to have this type of service, when they need it.

“As you know, private insurance costs money – quite a bit.”

Do you think it would cost you more than $110 a month, then?

“Yes. Well, yes, of course it will. Based on my age and my condition, yes.”

Rubio’s office did not respond to WMNF’s phone or email requests for a recorded interview, but sent us this statement by email after the story aired:

Good afternoon –
Off the record, “Organize Now” is funded by labor unions and closely tied to the discredited organization ACORN.
Here’s an on the record statement from a Rubio spokesman: “ObamaCare has led to skyrocketing premiums and patients losing access to their doctors, and it’s been such a failure that health insurance companies are demanding billions of taxpayer dollars to bail them out. Senator Rubio looks forward to repealing ObamaCare and replacing it with a system that puts patients first and provides more choices and better care at lower costs.”
Background:
·         Associated Press: “Taxpayers will fork over nearly $10 billion more next year to cover double-digit premium hikes for subsidized health insurance under President Barack Obama’s law, according to a study” by the Center for Health and Economy.
·         Tampa Bay Times: “The average rate hike in Florida was 19 percent.”
·         USA Today: “Much of Southwest Florida, a region with uninsured rates above the national average, will have a single insurer from which they can select plans: Florida Blue. Nearly 93,000 residents of the Gulf Coast counties enrolled in exchange plans during the last enrollment period, according to government figures. About 80,000 of them live in counties with a single provider this time around.”
·         Gallup: “Americans’ assessments of the Affordable Care Act (ACA) remain relatively unchanged after the Nov. 8 election, with more continuing to disapprove (53%) than approve (42%) of the law. Going forward, the vast majority of Americans want to see the law changed. … [I]t is clear that about eight in 10 Americans favor changing the ACA significantly (43%) or replacing it altogether (37%).”
·         Tampa Bay Times: “After a decades-long career as an insurance claims adjustor, Dave Beveridge fulfilled his goal of retiring at 60. He never imagined the cost of health insurance would drive him back into the workforce. But Beveridge, 63, had to take a temporary position with a Tampa insurance company, he said, because the monthly premium for his Affordable Care Act plan is so expensive. ‘The only reason I’m working is to pay the premiums,’ he said. In 2016, he and his wife Nancy paid $868 a month for a bronze plan from Humana. In 2017, the cheapest plan available to them is a $1,267-a-month bronze plan from Florida Blue, he said. The deductible is $6,800.”
·         Tampa Bay Times: “[Jules] Stewart and her husband, Kip Koelsch … chose a silver plan from Humana. They were stunned by the $774 monthly premium, she said — especially because they had to meet a $12,000 deductible before most of the benefits kicked in. ‘We’re literally siphoning through our savings to be protected,’ she said. She also had to change primary care physicians. … ‘My husband and I are solidly middle class and wonder how folks living just below our level manage to afford Obamacare,’ she said. ‘It doesn’t seem to benefit anyone I know.’”
·         The Sun-Sentinel reported that “49 of Florida’s 67 counties” will only have one insurer to “choose” from on the state’s Obamacare exchange.
·         As a recent Florida Times-Union editorial put it: “Obamacare is a failing insurance product”
·         And these problems are not new.
Regards,
Matt Wolking | Press Secretary
U.S. Senator Marco Rubio (FL)