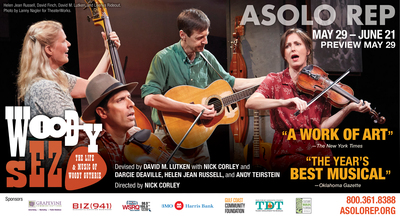 Joining us today is actor David Lutken, actor and co-creator of Woody Sez:The Life and Music of Woody Guthrie, a play based on the life and work of the seminal folk musician, whose politicized take on traditional folk songs influenced the protest songs and folk revival of the 1960’s. We talk about how Guthrie’s upbringing and travels throughout the Great Depression and Dust bowl period influenced his music and poetry.

Woody Sez will be premiering locally at the Asolo Repertory Theatre in Sarasota on Saturday and will run through June 21st at the Mertz Theatre in the FSU Center for the Performing Arts.