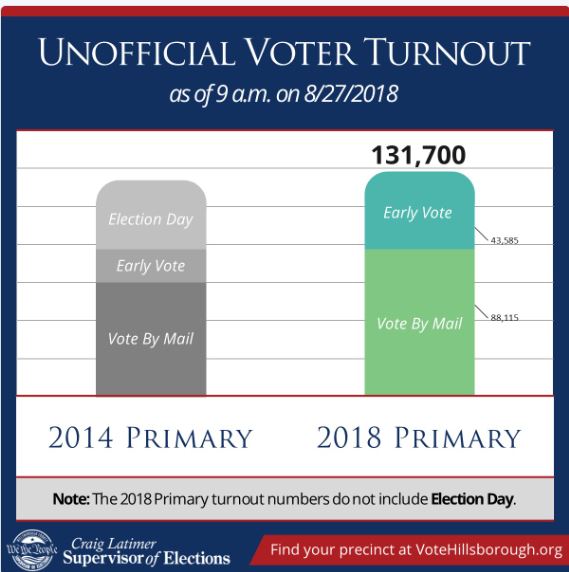 Hillsborough Supervisor of Elections Office Craig Latimer said that as of 9am this morning, 131,700 people in Hillsborough had used early voting. That surpasses 2014’s total mid-term primary turn out. (Latimer was on RadioActivity with Rob Lorei today. You can listen to the interview here.)

If historic turnout pattern hold among Florida’s more than 13 million registered voters, it could mean that about half cast ballots before Election Day.
More than 1.8 people voted early or by mail in the 2016 general primary, and over 2.1 million in that year’s presidential primary. More than 1.2 million did so in the 2014 mid-term primary.

What gets decided on Tuesday?

Tuesday’s election features wide-open gubernatorial primaries, Cabinet primaries and many contested congressional races. There will be 11 amendments on the ballot in November, and it is possible that the two which have been removed by the courts – removing charter schools from school board oversight and ending greyhound racing – might be restored. Ballotopia is an excellent resource for election material.

There are actually eight candidates running for Florida’s Senate seat. Besides the incumbent, Democrat Bill Nelson, and his main challenger, Republican Rick Scott, there are some interesting people on the ballot. Self-funding candidate Roque “Rocky” De La Fuente  is on the Florida ballot, challenging Governor Scott, and at one point was on the ballot in California and several other states. He is unlikely to topple Scott.

There are four (4) write-in Senate candidates that may be on the ballot in the general election.

There are also non-partisan races on the ballot for Circuit Court judges and school board members. In St. Pete, the District 70 State Representative race is open to everyone to vote in, because there are no Republican challengers.

Lots of interest in the governor’s mansion.

Twitter seems to think that billionaire Democratic candidate and neighbor to the current president’s Florida home Jeff Greene has given up on the race for governor.

That still leaves six other candidates for the Democratic nomination, including Andrew Gillum, Gwen Graham, Chris King, Philip Levine, and two you might not know well – Alex ‘Lundy’ Lundmark and John Wetherbee.

On the GOP side, the race between current Agriculture Commissioner Adam Putnam and Representative Ron DeSantis may or may not be impacted by the six other candidates in that primary.  Once the two major parties have chosen their candidates, they will be competing with 11 others who have qualified as write-in or no party affiliation, or the one Reform Party candidate.