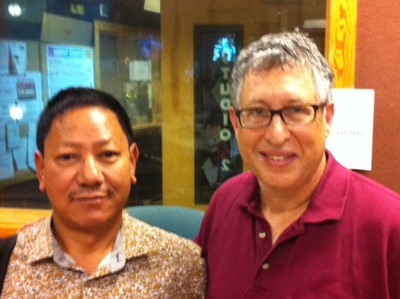 Today on Radioactivity, Rob Lorei speaks with former major in Nepal’s army- who was seriously injured in a Maoist guerilla ambush. He and members of his village have stood up to guerillas and security forces to create a zone where no fighting goes on. Hem Pun is a peace activist and will be speaking tonight in St. Petersburg.

Later Rob, discusses a rally in Tampa today and more than 100 cities across the country where fast food workers will be striking and committing acts of civil disobedience to call for an increase in wages. Rob speaks to Reighnesia Nix who works at Taco Bell on Fowler, is a mother of 3, and makes $8.20 an hour.

One of those who is advocating for a higher minimum wage is former Green Party presidential candidate Ralph Nader. He says that a majority of people in the country now believe that raising the minimum wage is a good idea- even high profile Republicans. According to Nader, if the Democrats back this issue- it would be a winning strategy in this fall’s elections. Rob spoke with Ralph Nader earlier this week and airs his interview on the show