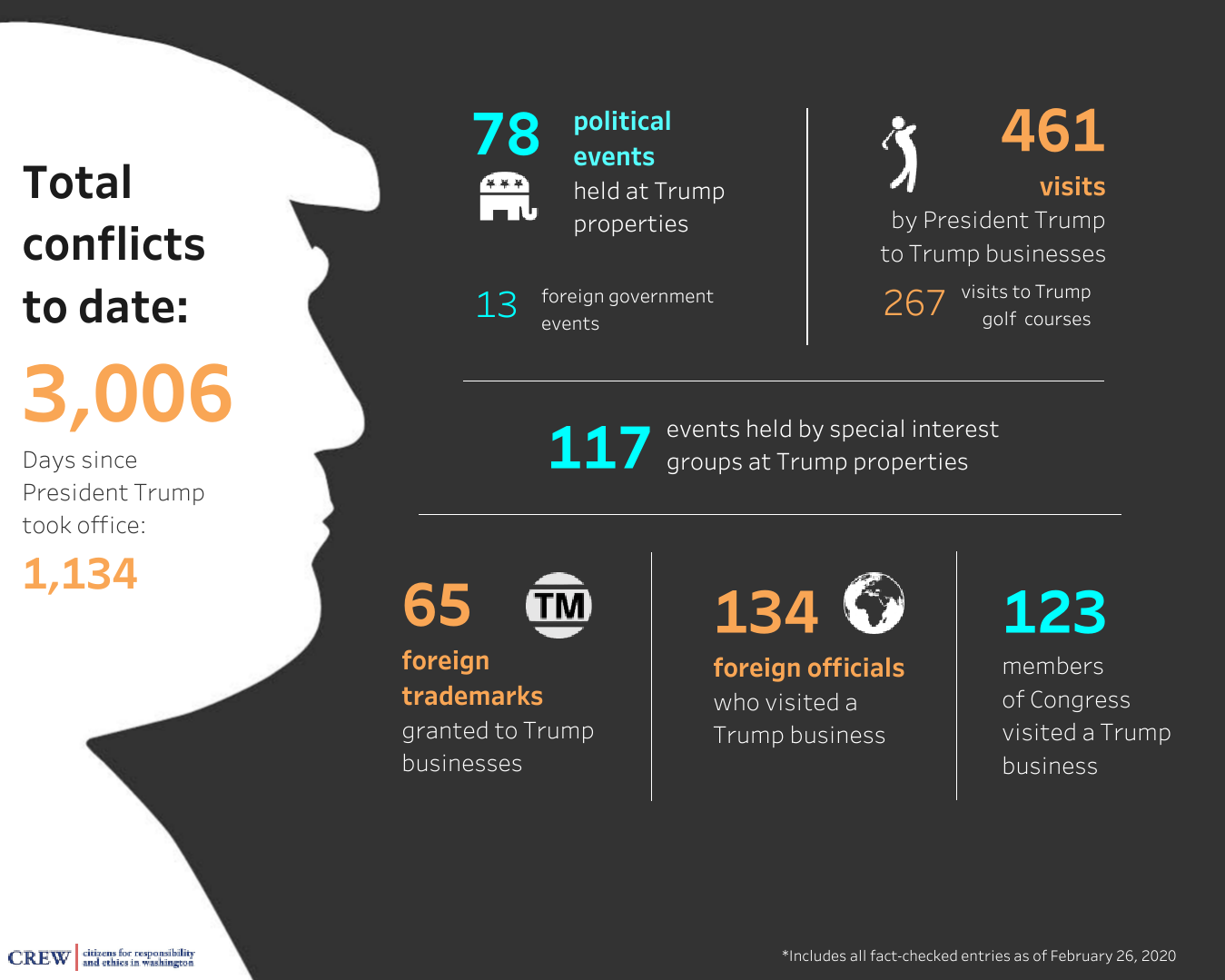 Good morning, welcome to Radioactivity. I’m Rob Lorei. Coming up—
The government watchdog Citizens for Responsibility and Ethics in Washington announced last Friday that after more than three years of monitoring President Donald Trump’s conduct, the president has hit a milestone, amassing more than 3,000 conflicts of interest between his businesses and his position in office.

The president famously promised to drain the swamp in Washington. Many voters thought he was talking about ending corruption in government. But this new study suggests that the corruption is expanding under President Trump- with he and his family directly profiting from the presidency.

Here to talk about the study (https://www.citizensforethics.org/press-release/trump-accumulated-3000-conflicts-of-interest/) is Robert Maguire who is the Research Director at Citizens for Responsibility and Ethics in Washington.

From the CREW press release:
Washington — Since assuming the presidency, Donald Trump has racked up more than 3,000 conflicts of interest from his refusal to divest from his businesses, according to a report released today by Citizens for Responsibility and Ethics in Washington (CREW). CREW, which has closely monitored President Trump’s conflicts of interest since the beginning of his presidency, has tracked interactions between the president, the Trump Organization, and those trying to influence government decisions and public policies, including members of Congress, industry groups, lobbyists and cabinet officials.
Trump averages more than two conflicts of interest per day, an astonishing rate of corruption. CREW monitors the president’s conflicts of interests by assigning them into five broad categories that showcase the president’s willingness to blend his personal gain with his professional responsibilities. Highlights from CREW’s tracking include:
• During the impeachment proceedings into President Trump, 55 members of Congress made a combined 78 visits to Trump properties.
• President Trump has made 267 visits to the golf courses he owns and profits from.
• Cabinet members have patronized Trump properties and attended events with special interests or wealthy political donors no fewer than 30 times.
• Special interest groups, many that have business before the Trump administration, have hosted or sponsored 117 events at Trump properties since he took office. Political groups have held another 78 events at Trump properties.
• Foreign government-tied entities have held 13 events at Trump properties, and at least 134 foreign officials have visited one of Trump’s properties.
• Foreign governments have granted President Trump’s businesses 65 trademarks while he’s been in office.
“Every one of the more than 3,000 conflicts of interest that President Trump has incurred through his businesses raises new questions about whether he is making decisions in the interest of the American people or his own bottom line. Not only does he appear to be profiting from the presidency daily, but he is constantly facing new temptations to use his office for his own benefit,” said CREW Executive Director Noah Bookbinder. “The president’s decision to retain a financial interest in the Trump Organization sets a dangerous precedent for future presidents and officials who will be less inclined to separate their own interests from their public duties and to choose duty over corruption.”
CREW’s tracking defines a conflict of interest as any interaction between the Trump Organization and the federal government, U.S. state governments, and foreign governments, as well as interactions between the Trump Organization and special interests that try to influence the federal government. Using social media, news reports, White House press pool reports, speech transcripts, Freedom of Information Act requests, and other sources, CREW identifies, reviews, and fact checks each potential conflict of interest before including it in its tracking database. CREW uses the data from its tracking database to update its conflict tracker.
“The president has made it abundantly clear he has no intention of changing his behavior or separating his private business interests from his responsibilities as a public servant, so staying informed about the ways his private interests intersect with the presidency is more important than ever,” said Bookbinder. 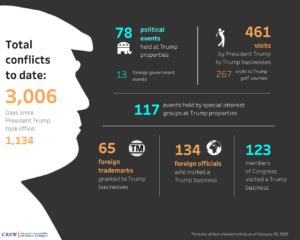