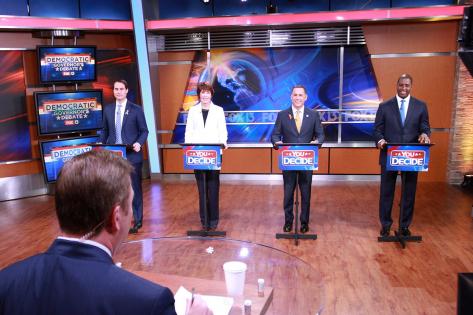 The next official debate featuring the four Democratic candidates for governor will take place at Pinellas Park High School auditorium in Largo on June 9. It it tentatively scheduled to run from 5 p.m. to 6 p.m., but that time is not official yet.

While the June 9 debate is not officially in St. Petersburg as previously announced, the Largo location is close enough, located approximately 15 miles north in Pinellas County. Among the co-sponsors for the debate are Indivisible FL 13 and the Women’s March. An official statement about the event (including where to obtain free tickets to attend) will be announced later this week.

The Republican Party of Florida will hold a gubernatorial debate in Orlando on June 28. The two announced candidates – Agriculture Commissioner Adam Putnam and Representative Ron DeSantis – are also expected to appear at a forum this Saturday in Orlando hosted by the Florida Family Policy Council that will be moderated by Frank Luntz.