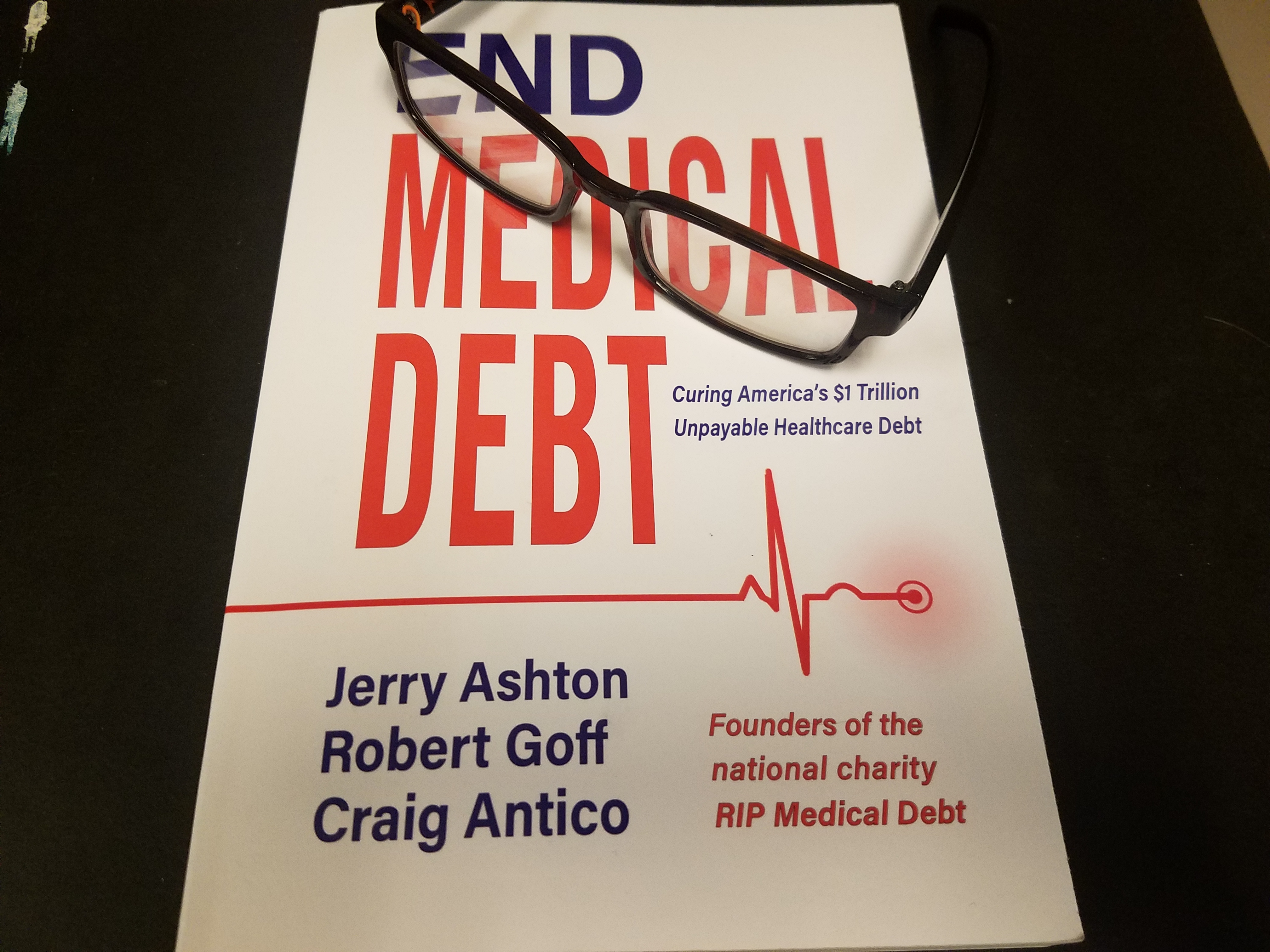 This week more than 100 members of the U.S. House of Representatives introduced H.R. 1384, which would enact the Medicare for All Act of 2019. Independent Vermont Senator and presidential candidate Bernie Sanders is expected to introduce a companion bill in the U.S. Senate.

But until a single-payer system like that is enacted, the U.S. is stuck with what may be the most expensive health system in the world. And it often leads to people getting such high bills that they just can’t afford to pay them.

Our guest today has a nonprofit that gets rid of medical debts.

What is RIP Medical Debt?

“The RIP is rest in peace and the other half, medical debt, is what we do, RIP Medical Debt is a 501(c)(3) charity, located in New York City we work nationally and our function is to accept donations, use these donations to go out to the debt market where debt is bought and sold, much like package mortgages are, and when we step up to buy this medical debt, which is usually for a penny or so on the dollar and we elbow out collection agencies who are attempting to buy the same portfolio, once we get that in our possession, we forgive it. We abolish that medical debt and with no tax consequences to the recipient.”

Why would you do that?

“It sort of feels like the thing to do. Any time, I think, for any person, any time you have a chance to make a difference in someone’s life and you are at the right place and right time to do it, it’s what you do. In my case, I’m a former bill collector. Quite a career in calling up people and saying “I want my money”. That’s what bill collectors do. Either they’re wanting the money on behalf of their client, or if they’re a debt buyer, they want the money because they now hold that debt. So when I chanced upon this opportunity to become a predatory giver, instead of a bill collector and I was partnered in this with a friend of mine named Craig Antico, who also worked with me in the collection industry for a number of years. So we use the same skills, the same software that ordinarily would be used in chasing after medical debt. The difference is we re-purposed it and we re-purposed our lives to do that.”

Give me an idea of the scale of the problem. How much medical debt does a typical American have and what’s the scale over the entire country, for example.

“Well, there’s a one trillion dollar unpayable healthcare debt overhanging Americans. We don’t know that. Actually our attention is mostly drawn to issue of healthcare but not to the cost to the individual of healthcare. So in the massive costs that are absorbed by what we call the healthcare industry, and distributed, the patient is the new payer. The patient is the person who is expected to pony-up most of the money, either by insurance premiums, by deductibles, by co-pays, by co-insurance. All these are designed to extract money from you and me as a patient. How well that money is used, of course, is a question that is not in our world. We just are dealing with the casualties. We’re a little bit like one of those teams called MASH units back in the Korean days. We arrive on the battle field. We attend to the wounded. We do what we can to bring people back to life financially in the work that we do. We’re not there to argue with the generals. We’re not there to declare how bad war is. I think people can guess what they might feel about that. We do our job. We’re tending to the wounded.”

Give me a story about someone who has had the opportunity to have their debts forgiven. How do you reach out to them and what is their reaction when they find out?

“Well, let’s first preface that with realizing that, in our world, when we buy debt, we buy it in bulk. We don’t know who this individual is. It’s a random act of kindness. We had one couple, here in Florida, that donated enough money to us because they were incensed by the politics involved that puts people at risk for medical bills. And they donated enough money to abolish a quarter billion dollars of unpaid and unpayable medical debt across the U.S.. They did it with no strings attached; no recognition required; just a random act of kindness. Now I as a person who’s charged with distributing that kindness, sometimes people identify themselves. So they’ll get a letter from us. And sometimes if it is a promotional, like through radio and TV stations, or through church groups, it’s a yellow envelope, and it says RIP Medical Debt. It may or may not have the name of the donor on it. But when they open it up, this is the first time that they realize that someone cared enough about them to pick up that bill on their behalf. That’s when people know. Some one in the Villages, north of here, had his medical debt abolished, and didn’t remember receiving the letter until he checked his credit report. He discovered that the one sole credit mark that was bringing his credit score down from 30 to 70 points was gone and we upped his credit score. So he notified us. He let us know. But ordinarily, we don’t have the pleasure of meeting with people whose lives our donors make a difference.”

You buy this debt in bulk. But is there any way for someone who is in medical debt to kind of flag their case for you to get immediate help.

“Yes, If you go to RIPMedicalDebt.org, we have a place for people in need to put their names in. In the event that our technology gets good enough that we are able to identify individuals, until that time, it’s a waiting list. There’s no guarantees, just a lot of hope that goes into it. And the stories that we get, would melt the heart of a stone statue. No one listening to the station really understands unless they’re in the middle of an experience of a medical problem. The anguish and pain that’s caused. 60% of all bankruptcies in America are related to medical debt. Of that 70% of these people who declare bankruptcy actually had medical insurance. That just shows you the quality of that type of insurance. And anybody listening is one accident, one illness away from declaring bankruptcy, and having their lives turned upside down.”

Earlier in the interview, you used an analogy that you didn’t want to tell the generals how to wage the war, but I’m going to push on that a little and ask you if there’s a way you can foresee the policy changes in the country to essentially put your nonprofit out of business so that people don’t get medical debt in the future. Is that something that you have any thoughts on?

“This is the joy of being both the individual to express what I feel, and, of course, being in a charity, we’re apolitical. It’s not our work to take a position. As individuals, the three of us who started RIP Medical Debt, that would be Robert Goff, who is the original chairman of the board, Craig Antico, and I, we wrote a book. And the book is just published on Amazon, is called “End Medical Debt”. And, in that book, “End Medical Debt”, we each of us take the task…the politicians…pharma… big hospitals…everybody who got their hands in our pockets one way or another. And we thoroughly out these people for the roles that they play. And what’s interesting, even a 3 individuals, one is more to the left, one is more to the right, one is kind of like intelligently in the center, and each one of us doesn’t necessarily agree with the other. But we do respect each other. It’s a type of thing, it’s a dialogue that is missing in America, to be able to listen to someone with a different point of view, attempt to hear where the truth is within that and respond to that as opposed to the politics that’s involved. Does that make sense to you?”

It does. …. But I want to stretch it a little bit further and ask you how does the medical debt that people in America have compare to other countries and, maybe why the difference.

“What medical debt in other countries? We are the only of 18 industrialized nations that doesn’t have universal healthcare? And Japan, with universal healthcare, have the greatest life expectancy. They will outlive you and me by a good 5 or 6 years. They will have greater health. They have the least instances of infant mortality. Americans love to say this. “We’re the best.” The facts don’t back that up. We may be 13th or 18th in nations for the quality of healthcare that we give. Don’t tell me about John Hopkins. Don’t tell me about all these wonderful places. We’re talking about in the United States of America, when you walk into a local hospital, be it profit of nonprofit, you’re basically at the mercy of the quality of that hospital and those doctors. And, across the board, you’ll find out that we don’t deliver healthcare at the same quality, and we do it for at least 5 times the cost. We out-spend every other nation, and we have people, who, when they do go to the hospital, and they do get well, they are then destroyed by the medical debt that’s been incurred. Now if you can show me a morality in that, or maybe a morality of lesson, really, we would ask ourselves, and we were Satin, and came to the Earth and decided we want to inflict the maximum amount of pain on people dealing with debt, and medical debt in particular, they couldn’t have devised a better system than we have in the United States.”

Remind me again the title of your book and where we can find more information.

“RIPmedicaldebt.org. And I might add another thing for the listeners. If you were to go to Amazon and buy our book to learn more about this and what you can do about it and what the remedies are, the purchase price of $15.95, since all three authors are donating our royalties to RIP Medical Debt, that’s equivalent to giving $500 in medical debt rescue to somebody.”

You can listen to the full show here.

Another group you can check out is Rolling Jubilee.

We had a lively conversation with listeners, including two Canadians who talked about how much better their system is than the U.S. medical system. We also heard from several people telling their stories about being buried with medical debt?

At 11:00 a.m. one of our guests will be Rev. Andy Oliver from Allendale United Methodist Church in St. Petersburg. We’ll talk about how his parish is defying the larger church’s restrictions on LGBT people.