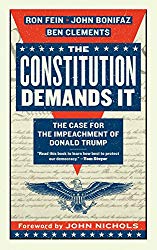 Written by a trio of veteran constitutional attorneys who argue that according to the Constitution, the time to talk about impeachment is now. They offer a precise case against the president, detailing eight legal grounds, including illegal payments from foreign governments; using government agencies to persecute political enemies; obstructing justice; abusing the pardon power; undermining of the freedom of the press. Ron Fein, Legal Director for Free Speech For People joins the program to talk about his book and answer questions emailed in by listeners. “Why isn’t anyone moving forward with impeachment? Why are the people in power so forgiving and willing to look the other way?” Asks Janis in Seattle. Ron Fein expertly gives his opinion on what could well be the most important question right now.