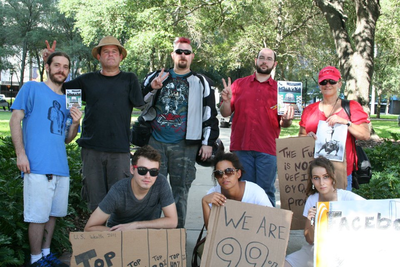 Ten years ago this week was the beginning of the Occupy Wall Street movement. It quickly spread to communities across America and the world.

Below is the only news report about that demonstration. We published it on wmnf.org on September 26, 2011:

Occupy Wall Street is a people-powered movement for democracy that began on September 17 with an encampment in the financial district of New York City. A Tampa group began similar protests against financial institutions at downtown’s Gaslight Park on Saturday.

Scott Shepard drove from Lakeland to attend the protest after seeing the newly-created Occupy Tampa Facebook page. He joined about 8 Tampa Bay residents drawing up signs and strategies on the sunny afternoon.

After a week of ignoring the demonstrations, on Saturday the St. Petersburg Times finally ran a caption and an Associated Press photo of the Occupy Wall Street protests on page 4B.

Blake Westlake organized the Occupy Tampa protest and started a Facebook page the day before.

At the Occupy Wall Street protest there are elements of democratic consensus building, such as holding votes for what their most pressing demands should be. Westlake said he may be incorporating those demands into the Occupy Tampa movement.

Westlake said the group is trying to focus their goals on corporate corruption, and not merely partisan aims.

The protestors planned to confront big businesses like Bank of America; which they say has benefited from government bailouts and influences America’s financial policies. Chris Dorsey works for the Crow’s Nest, A student-run newspaper at the University of South Florida St. Petersburg, and was excited to start planning strategies.

Some media accounts have described Occupy Wall Street protestors as overeducated and underemployed. Sean Doyle has been out of work for a year and a half, and thinks he will have a hard time finding a job with his credit score. He thinks that Bank of America should pay back the money they were given by the government.

While many wealthy Americans have called proposed tax hikes on millionaires class warfare, Westlake said the corporate tax rate is already at one of its record low points in US History, and that they should pay their fair share.

Presidential candidate Mitt Romney has been criticized for his opinion that corporations are people. Westlake said that the legal definitions of corporations have strayed considerably from their original intent.

As of Monday morning, the Occupy Tampa Facebook page had more than 400 likes. The group is mainly focused on preparing to join a US Day of Rage on October 6th at 9 in the morning again in downtown Tampa’s Lykes Gaslight Park.