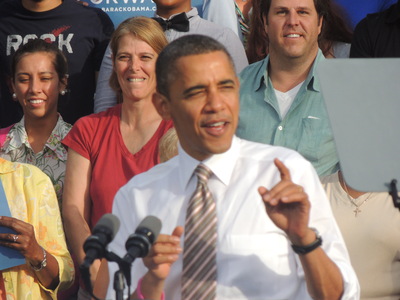 President Barack Obama is heading to Tampa Tuesday and will meet Wednesday morning with leaders of U.S. Central Command at MacDill Air Force Base to review strategies for the expanding war in Iraq and Syria.

Joining him will be Defense Secretary Chuck Hagel, who said Tuesday the U.S. is “at war with ISIL as we are with Al Qaeda.”

“We’ll travel tonight to Tampa to receive a briefing from the commander of U.S Central Command, General Austin, on operational plans to implement his ISIL strategy. I’ll join the president tomorrow in Tampa for that briefing. The Defense Department civilian and military leaders are in complete agreement that the United States and our allies and partners must take action against ISIL and that the present strategy is the right approach. However, as president Obama has repeatedly made clear, American military power alone cannot, will not eradicate these threats posed by ISIL to the United States, our allies, and friends and partners in the region. Iraq’s continued political progress toward a more inclusive and representative government and its programs of reform and reconciliation will be critical to achieve the progress required. We believe that Iraqi Prime Minister Abadi is committed to bring in all Iraqis together against ISIL. To support him and the Iraqi people in their fight, the coalition will need to use all of its instruments of power. We intend to use all of those instruments of power: military, law enforcement, economic, diplomatic and intelligence in coordination with all the countries in the region. To succeed this strategy will also require a strong partnership between our Executive branch and our Congress.”

Hagel spoke in front of the Senate Armed Services Committee. The Committee also questioned General Martin Dempsey, Chair of the Joint Chiefs of Staff. He says that instead of a “Shock and Awe” bombing campaign, ISIL would be defeated with a persistent “generational” approach.

“With coalition partners and contributions we will begin building a force of vetted, trained, moderate Syrians to take on ISIL in Syria. We will work to ensure they have a Syrian chain of command and report to a moderate political Authority. This force will work initially at the local and community level and help to put together Syrians who have most failed the harsh hand of ISIL. In conjunction with that long term effort we will be prepared to strike ISIL’s targets in Syria that degrades ISIL’s capabilities. This won’t look like a shock and awe campaign because that’s simply not how ISIL is organized, but it will be a persistent and sustainable campaign. I want emphasize that our military actions must be part of a whole government effort that work to disrupt ISIL financing, interdict the movement of foreign fighters across borders and undermine the ISIL message. Given a coalition of capable willing regional and international partners, I believe we can destroy ISIL in Iraq, restore the Iraq – Syria border and disrupt ISIL in Syria. ISIL will be automatically defeated when her clock of religious legitimacy is stripped away and when the population on which they imposed themselves reject them. Our actions are intended to move into that direction. This will require a sustained effort over an extended period of time. It’s a generational problem and we should expect that or enemies will adapt their tactics as we adjust our approach.”

Dozens of peace activists packed the hearing room. Many of them wore pink as part of the Code Pink group. They chanted “No War” at the beginning of the hearing and interrupted it at least five times saying things like “it’s the U.S. intervention that strengthens ISIL.” In one exchange, retired Colonel Anne Wright tells the committee, “War will guarantee that there will be more extremism.”

But the criticism of the Obama administration’s warlike approach to ISIL was not limited to peace activists. Some Republicans, like Oklahoma’s Jim Inhofe, say the approach will fail because it is not militaristic enough.

“But the President already ruled out boots on the ground. There was a collective sigh of relief at ISIL’s headquarters when they heard him say that. His claim of no boots on the ground is an insult to the men and women in Iraq today who are serving in harm’s way. We already have boots on the ground in Bagdad and throughout Iraq. We should ask the pilots dropping bombs over Iraq whether they think they are in combat. Pilots who face the real threat of having to eject over ISIS-held territory. I am not advocating an Army division or combat elements on the ground, but it is foolhardy for the Obama administration to tie the hands and so firmly rule out the possibility of air controllers and special operators on the ground to direct air strikes and advise fighter forces. It sends the wrong message to our troops, to the enemy and to partners. Furthermore, if Congress does authorize the training and equipment of the Syrian moderate opposition and them to pushes them into combat without advisers on the ground, that effort is most likely to fail.”

Because of the President’s visit, The City of Tampa has released traffic advisory. Roads, businesses, and parking garages south of Kennedy Boulevard in downtown Tampa will be affected from late Tuesday through Wednesday. The city advises commuters working downtown to either flex their hours or consider leaving early from work Tuesday afternoon and arriving earlier or later than usual Wednesday morning.