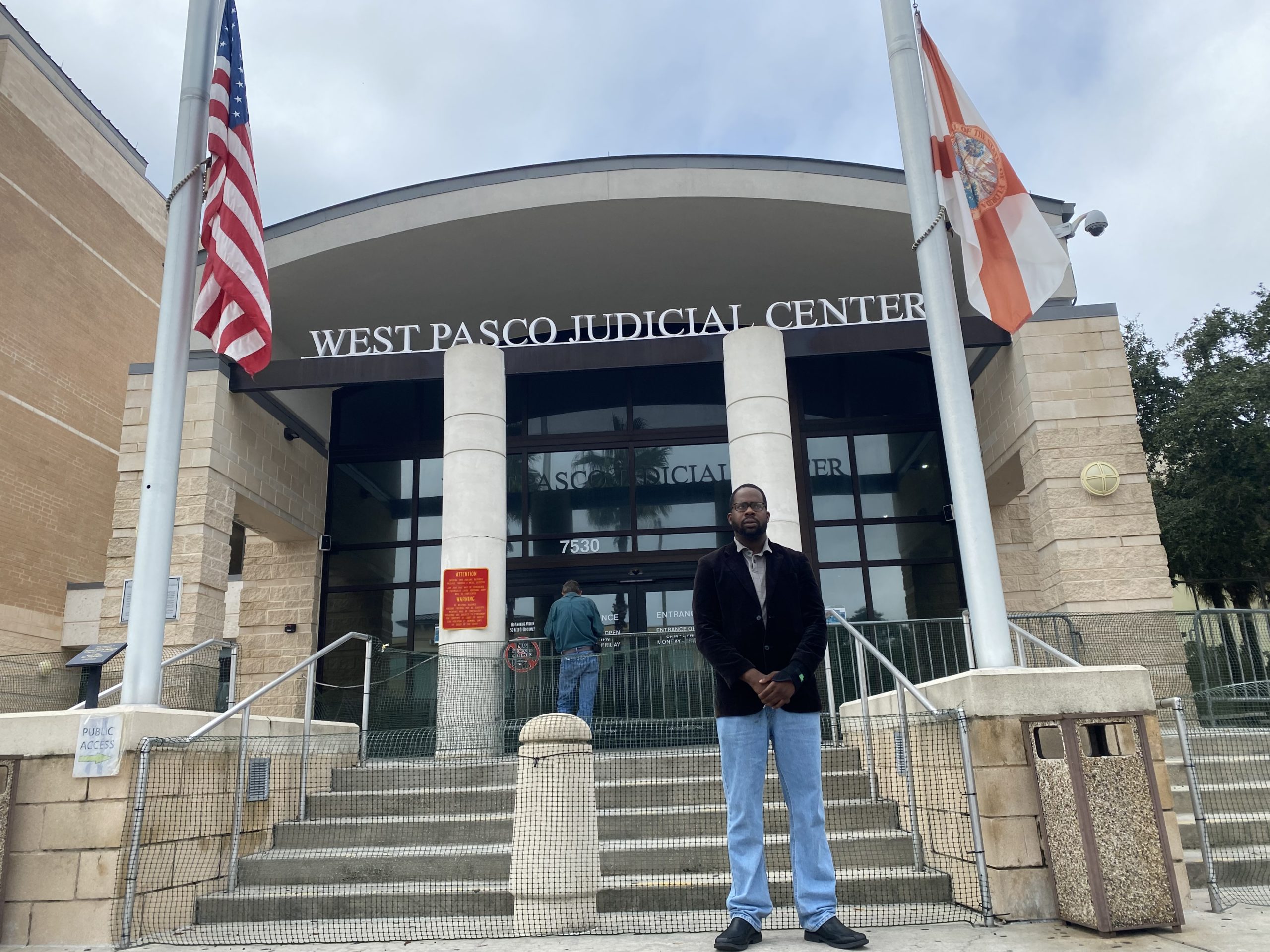 A Black Lives Matter activist in Pasco was arraigned Friday on charges he battered a New Port Richey police officer in July and obstructed the officer without violence.

Marlowe Jones will plead not guilty to the charges and maintains he, and other activists, are being targeted by New Port Richey police.

Despite facing a possible five-year prison sentence for a third-degree felony charge and the death threats he’s received since his arrest, 29-year-old Marlowe Jones said he felt good as stood in front of the West Pasco Judicial Center Friday Morning.

Jones, a Black man, was arrested July 31st and booked into Pasco County jail just after midnight on Aug. 1. A week earlier, Jones and other activists were participating in a peaceful protest when, according to police and court records, Patrick Oshnock, a white Colorado resident, came out of a bar and attacked Stephanie Hinkle, a woman activist.

Police ran to break up the altercation and directed the crowd to move back. That’s when police said Jones ignored an officer’s commands and pushed the officer’s hand away. The officer, Nicholas Rickus, was not wearing a body camera, but New Port Richey Police released footage from another officer at the scene.

The footage shows Rickus separate the Oshnock , who was standing, from Hinkle who was on the ground. Hinkle was lawfully carrying a gun in her waistband.

The officer removed it.

“He grabbed the weapon and started screaming, ‘gun, gun, gun, gun, gun'” Jones said. “And then we thought that he was going to shoot the protester on the ground.”

Body camera footage shows police ordering the crowd back as Jones talks to responding officers, eventually moving back with the crowd, both arms out at his side.

“He made a gesture like he was reaching for something,” Bogart said. “Our officer reached out and grabbed his hand and Marlowe knocked him away, knocked his hand away. And that’s what Marlowe couldn’t and shouldn’t have done. He should’ve backed up when the officer told him to and not interfered.”

But Jones said he never touched Rickus and has had a good dialogue with leadership in the city. But as calls for police reform gain traction across the country, Jones and other activists believe he’s being targeted as a leader.

“I’ve been having good dialogue with these people. I’ve been on a good page with these people,” he said.” For them to all of a sudden turn around and say, ‘You battered one of our law enforcement officers. You obstructed justice.’ It’s total b.s”

Daniel Callaghan works with the Citizens Against Discrimination and Social Injustice. He’s known Jones for more than a decade. He watched as Jones was mentored through the African American Club of Pasco and became a leader in the community. Callaghan thinks the city is trying to make an example of Jones to end the movement by taking down its leader.

“I believe that to the bottom of my soul,” he said. “There’s an effort here to ruin a life in order to destroy a movement.”

But Chief Bogart said that’s not the case.

“That has nothing to do with this. Nothing,” Bogart said. “It doesn’t matter who that is. They were interfering. Marlowe doesn’t want to accept that.”

Jones will next appear in court for a pre-trial conference on Dec. 11th.