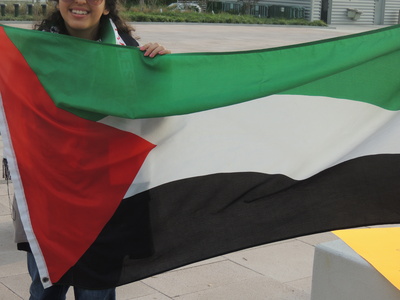 Every year on May 15, Palestinians remember what they call the Nakba, often translated as the ‘catastrophe.’ It marks the period in 1948 when hundreds of thousands of Palestinians fled or were expelled from their homes amid the foundation of the state of Israel in historic Palestine.

A peace group in Pasco County is holding a vigil to commemorate the Nakba Saturday morning. Bettejo Indelicato is with Florida Peace Action Network.

“This Saturday, May 11th, from 10:00 a.m. to noon, Florida Peace Action Network will be holding a vigil in commemoration of the Palestinian Nakba – the ethnic cleansing of Palestinian land by Zionist forces who had and have co-opted the Jewish religion. More than 700,000 Palestinians were forced to flee their homes. Hundreds were murdered in cold blood. And hundreds of Palestinian villages were razed to the ground.

You’re talking about events in 1948 when the State of Israel was formed in what had been British Palestine?

“Yes, this is the 71st year of the Palestinian refugee crisis.”

You’ve been to Palestine. What do you want people to know, who maybe haven’t been there, that you saw?

“The level of cruelty perpetuated on the Palestinian people by both the Israeli occupation forces and the settlers who are living in the West Bank is incredible. I can’t even understand it. The Palestinians are treated as less than human. I know civil rights leaders from the United States as well as from South Africa have visited Palestine and said that their countries were not as bad as the apartheid that is happening in Palestine now.

“The Palestinians are just like you and I. They just want to be able to take care of their families, live on their land. They’re just common people like you and I.”

I’ve heard people ask this question: ‘Well, then why does southern Israel often get rockets reigned down upon it, for example, from the Gaza Strip?’

Finally, let people know when and where this is one more time.

“It’s in Port Richey at the intersection of U.S. 19 and Ridge Road. We’re on the southwest corner and there’s parking available across the street at a gas station. From 10:00 a.m. to noon.”

On Saturday. And do you have a weekly Friday demonstration (for peace)?

“We do. And in fact this weekend is our anniversary of that demonstration. We’ve been out there now for fifteen years. Every Friday morning from 7:30 to 8:30 a.m.”