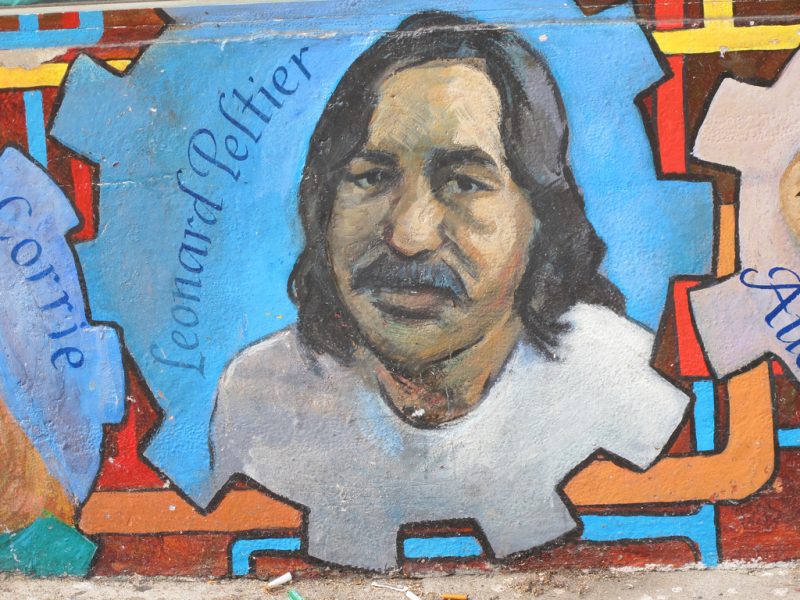 One of the most famous prisoners in the United States is housed just north of Tampa at United States Penitentiary, Coleman.; some people even go so far as to call American Indian activist Leonard Peltier a political prisoner, though he was convicted of murder in the 1970s. Now his supporters have asked President Barack Obama to grant Peltier clemency. WMNF News interviewed Peter Clark, co-director of the International Leonard Peltier Defense Committee.

“Leonard Peltier is a Native American activist. He’s presently serving two life terms in federal prison, currently, in a maximum security prison in Coleman, Florida. And that’s in connection with tragic events that took place on June 26, 1975, where there was a shootout on private property–on the Jumping Bull property–where American Indian Movement activists had been invited by traditional elders for protection, because at that time on the Pine Ridge reservation–as on many tribal nations around the country–traditional people who wanted to reconnect with their spiritual ways and their spirituality and their ceremonies, they were being oppressed, persecuted both by installed tribal government in connection with the federal government and Bureau of Indian Affairs.

“Len has been in for 40 years now. And pending any new evidence, he’s exhausted all his legal avenues. So, that’s why we’re pushing so hard for clemency from President Obama.”

“This is a new clemency petition that was submitted on February 17th of this year, 2016. We don’t anticipate any kind of response to a current petition. It would be highly irregular. In the past, Leonard has had a clemency petition that sat on the desk of President Clinton, was not acted upon by Clinton and then in the final days of the Bush administration–the second Bush administration–in 2009, George Bush denied that clemency application. For that reason, Leonard had to submit a new petition. A clemency petition stays open until a President acts on it–either grants it or denies it. Clinton did not act this petition. He just let it sit there.

If people are interested in this case and they want to get involved, what’s your suggestion?

“Well, really the best thing is–this is a good moment for me to plug our website–we are the official defense committee for Leonard Peltier. There are about 5 or 6 of us on a board of directors and 2 co-directors, myself and Leonard’s niece, Kari Ann Boushee and we’re all in touch with Leonard–almost on a daily basis. So, to find out what’s going on with the campaign, how to get involved, how to donate, also we can have ready-made postcards delivered to you that you can send to the White House or we will mail them for you if you mail them back, that’s all found on our website, which is www.whoisleonardpeltier.info. We’re also on Facebook “International Leonard Peltier Defense Committee” you can search that on Facebook and like us, we’d appreciate it.”

You say that you’ve been in touch with Mr. Peltier. What are his conditions like at Coleman Prison and what’s his mood like?

“I would characterize his mood as “anxious”, especially as more time goes by and we get towards the end of Obama’s administration. Many of us feel this is his last opportunity at freedom. Leonard does not feel he will live through another presidency.

“Typically, pardons are given at the end of an outgoing president. He doesn’t feel he’ll make it that long. He has an abdominal aortic aneurysm, which is a serious condition–life threatening condition–if that were to burst, where he is at Coleman federal prison, he’s in a maximum security, if that was to burst he would surely bleed out before he could get to an appropriate facility. For this reason and other reasons we’re trying to get him moved–well, it’s been ongoing trying to get Leonard transferred to a medium security where at least presumably less violent atmosphere. Because if Leonard were to get punched in the stomach that aneurysm could surely burst. So, we’re just trying to get him moved to a medium security prison, both appropriate for his age and his classification and his good time served throughout his 40 years.”