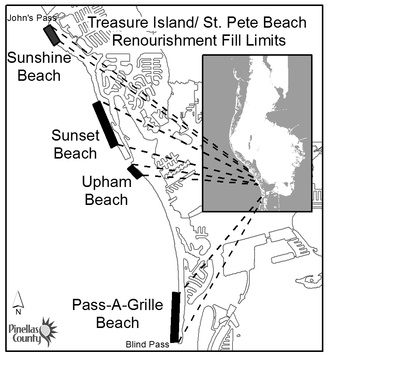 Some Pinellas County beaches are scheduled to get another facelift this summer. During an information session Tuesday night at city hall, Treasure Island citizens were enthusiastic about the beach renourishment but they still have some concerns.

In the wake of Hurricane Sandy and Tropical storm Debby, Pinellas beaches took a beating. Ten million dollars in federal emergency funds has been earmarked to pump fresh sand on to the impacted beaches. The remainder of the $16 million project will be paid out of Pinellas County tourist tax revenues. Laurel Reichold, US Army Corps of Engineer’s project manager, said this beach renourishment is part of a larger and longer federal commitment to Pinellas beaches.

Government, science and citizens are all in agreement that beaches are vital to Florida’s livelihood. Pinellas County’s Coastal & Freshwater resource manager, Andy Squire, said beaches are important because they protect from storms and provide jobs. He said that piping fresh sand onto the beaches protects against a radically altered coastline.

“Without development on barrier islands; those barrier island typically migrate because it’s how the natural system works. But now that we’ve put our roads and buildings on them, basically they’re going to try to move, but erosion will eat away until we put something to stop that erosion. Like a seawall or some sort of structure like that. So, without doing this nourishment project many of our beaches, like I said before, will be back (to) what they looked like years ago; with perhaps seawalls and waves lapping up against the seawalls with no beach.”

The federal government has agreed to renourish private beaches but in return, it will require public access. If the owners refuse the public access demand then the government will skip those beaches. That didn’t sit well with some of the nearly 70 people at city hall. Treasure Island mayor, Bob Minning, said the owners can’t have their cake and eat it too.

“So that’s the purpose of a perpetual easement; so they (government) always have access to it, and the public always has access to that area. That’s what the easement allows. What they’re afraid of is, you get some undesirable people there and maybe, they cause problems. And it’s all because you put sand there. So you have to make a choice.”

Two beach nourishment shift crews will work 24/7 both in the water, dredging the sand, and on the beach with bulldozers distributing the sand. The bulldozers shake the ground and have a back-up alarm that can’t be turned off or down. A few citizens were worried the bulldozers could impact nesting sea turtles. Laurel Reichold of the US Army Corps of Engineers, said precautions have been set in place.

“Any existing sea turtle nests, for example, that are roped off or will be roped off those won’t be touched until…if they’re hatched and construction is still in the area they can come back over afterwards. They county has hired a sea turtle observer to go throughout the season; to document any new nests; make sure the contractor’s aware to avoid impacting any of the those nests.”

Cathy Roedershiemer is a longtime visitor to the area and now a home owner on Treasure Island. Her concerns about animals were not put to rest by the panel’s response.

“Not really. I think they avoided the word killing of everything alive on the shoreline.”

The entire beach renourishment project from Sunset Beach to Pass-A-Grille is scheduled to begin July 2 and go through the month of August.