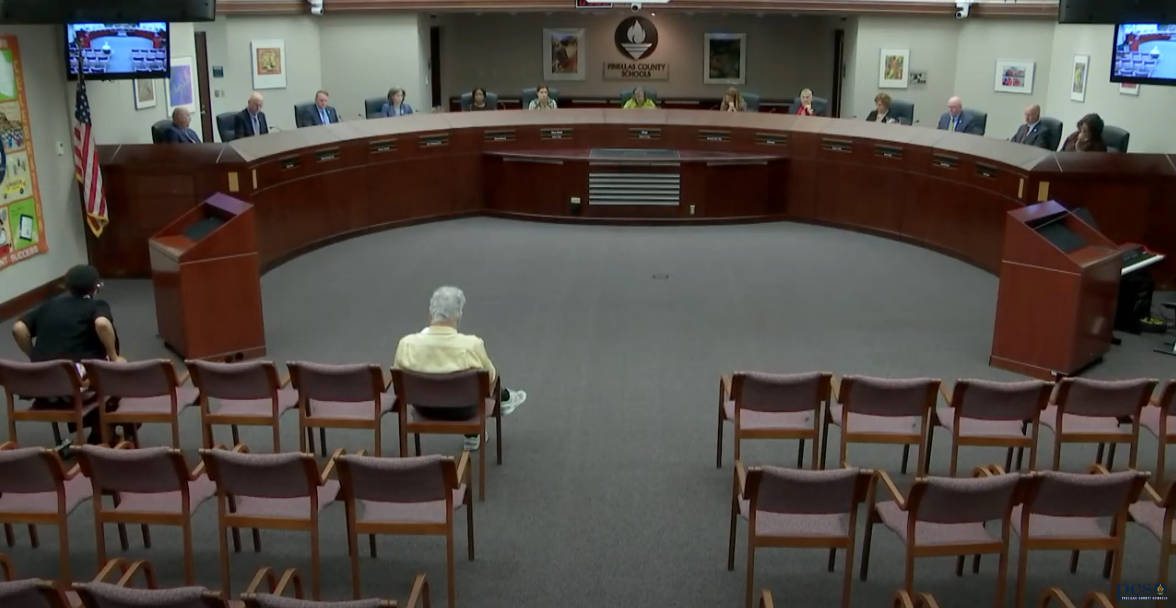 After months of negotiations, the Pinellas County School Board unanimously approved a new contract agreement on Tuesday that delivers pay raises for over 7,000 teachers and instructional staff in Pinellas County public schools, as well as more paid planning days, supplements, and one-time bonuses for longtime educators.

The new agreement reached between the district and the Pinellas County teachers union delivers a 4.25% average salary increase, and a total compensation package ranging between 6.46% and 7.67%, which includes 100% coverage of the increase to healthcare premiums, and 15 hours of paid planning at the employee’s hourly rate for additional planning or grading work.

“I know that during bargaining, it might feel like we’re on opposite sides of the table, but we’re not,” said school board member Laura Hine. “We are all on the same side of the table, and we are, we care passionately about and we invest our time and our energy into strong public education.”

This year’s raises, intended to help retain and attract teachers amid high inflation, rising rents, and the GOP’s political attacks on Florida educators, is larger than in previous years. It offers a 4.25% average pay raise, compared to the 3.25% raise negotiated in 2020 and 2021. It also raises the starting teacher salary in Pinellas County schools to $50,568, which exceeds the state average.

Still, the deal falls short of what the union had originally fought for at the beginning of the school year, as the district faced hundreds of educator and support staff vacancies.

In August, the Pinellas Classroom Teachers Association (PCTA) called for an 11.3% raise for the county’s public school teachers, to match the region’s rate of inflation. At the time, the district was offering the same 3.25% raise approved by both parties in 2020 and 2021, which the union’s president, after walking out of negotiations as “insulting.”

Philip Belcastro, an English teacher at St. Petersburg High School, used the same term to describe the 4.25% increase approved on Tuesday. “We’re living every other paycheck to paycheck,” Belcastro, 35, told WMNF. “I can’t go to my landlord and be like, ‘Oh, I don’t have any real money for you. My insurance doesn’t cost any more this year — I hope you’ll take that as payment.’”

Belcastro serves as co-chair of Florida’s Remarkable Educators (FYRE), a group of young educators in his union. And he worries that the new agreement will hinder the district’s mission to attract and retain new, younger teachers, particularly those who are single-income earners and who are renting in today’s overvalued market.

“I think this is going to lead to a lot of people thinking that they’re just going to go to different school districts, or leave the profession entirely. I would not be surprised if, like, if there’s a pretty sizable exodus of teachers,” said Belcastro.

Nancy Velardi, president of the Pinellas Classroom Teachers Association (PCTA), acknowledged that the raise wasn’t what they had originally pushed for.

“I, of course, believe that the teachers do deserve more,” Velardi told WMNF on Tuesday. “I do believe, considering the low funding that public schools receive, this was a pretty good deal and puts money in their [teachers’] pockets.”

The union’s membership, composed of teachers, school counselors, media specialists, and other instructional personnel, overwhelmingly supported the agreement in a vote on the deal last week, as the potential impact of Tropical Storm Nicole loomed over the Tampa Bay area.

But turnout for the vote on the deal was low, at 52.9%. Just about 91% voted in favor of the agreement, which Belcastro — who also voted ‘yes’ — said he found surprising, after talking privately to some of his coworkers within the district about the contents of the agreement originally reached earlier this month.

“There is some good stuff,” he said, pointing to some of the additions in the contract, such as lunch breaks for clinical staff, and the paid planning time.

Like Velardi, he also figured it was the best deal they were likely to get from the district, which has blamed state laws and a lack of available funding for their refusal to bump up their offer on raises. “The union’s really doing the best they can,” Belcastro said.

According to the Florida Education Association (FEA), the statewide teachers union, more than 20 laws and rules govern teachers’ pay in Florida. This ties the hands of districts, not just Pinellas, to offer better pay, particularly for veteran educators.

Florida Gov. Ron DeSantis, who easily won reelection for a second term this year without support from the state’s teachers unions, has allocated funding in recent years to bump starting teacher pay in Florida to $47,500 minimum, but critics say this effort has left longtime teachers behind.

Out of the hundreds of millions of dollars allocated by the Florida legislature for this mission since 2020, districts are only allowed to allocate 20% for longtime teachers, while new teachers get 80%, the Tallahassee Democrat reports.

“(The law) creates a false impression that we’re doing all this great stuff, but our veteran teachers are getting crushed, just slammed, with a lack of retirement, a lack of recognition,” said Scott Mazur, president of the Leon County teachers union, after negotiating their own deal in October.

To help address this imbalance, some districts, including Pinellas, have offered one-time bonuses for veteran educators. Under the new agreement in Pinellas, educators with 10 to 19 years of service in the district will receive one-time $735 bonuses, while teachers who have 20-plus years of experience will receive $1,000.

“Pinellas County Schools is proud of the salary agreement reached with the Pinellas Classroom Teachers Association,” the district shared in a statement. “The time spent negotiating and collaborating helped both sides produce an agreement that strengthened our positive relationship.” They expect the deal “will help the district attract and retain highly qualified teachers.”

According to the district, all increases approved on Tuesday are retroactive July 1, 2022. Employees in PCTA’s bargaining unit will receive both their raises and retroactive checks on Dec. 16, and the bonus checks for those who qualify will be distributed on Dec. 2.