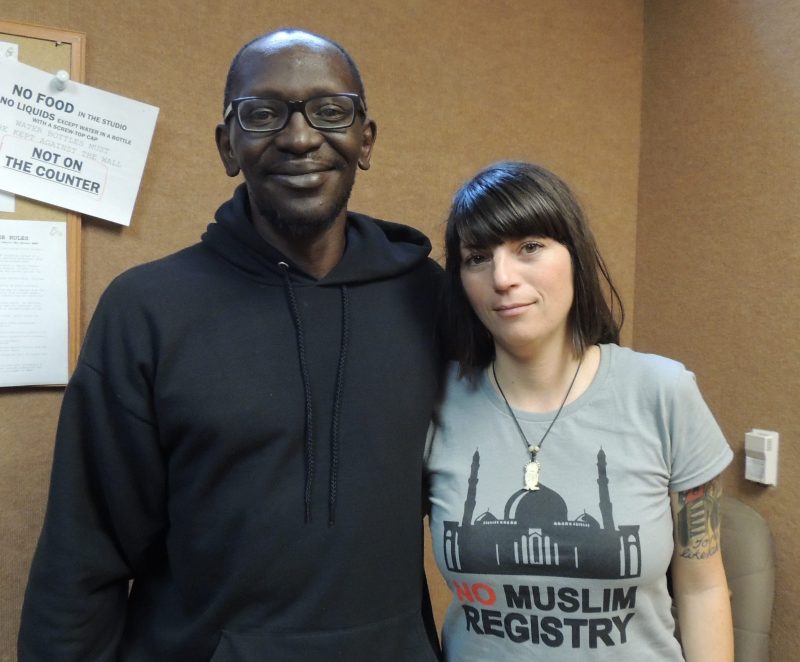 A couple times a week, the Tampa chapter of Food Not Bombs shares food with people in a park downtown; but Tuesday they were told to stop. WMNF News spoke with Mark Beloch, who is homeless in Tampa. In the interview he mentions the name of a Food Not Bombs organizer, Dezeray Lyn.

“This morning I was in Gaslight Park on Ashley Drive, directly across from the Tampa Police Department. I was waiting to get something to eat from Food Not Bombs. When they pulled in, I went to get me a cup of coffee and around that time, one of the Parks and Recreation workers pulled in, came to Dezeray and told her to pack up her stuff, she had to leave. Dezeray told him that “No. Not until everyone’s fed.”

“From there, the Parks and Recreation worker got on his phone and made calls. He was taking pictures as well. Taking photos of the table, of Dezeray, of all the homeless people in the park. That’s when two Tampa Police officers pulled up, you know, walked over there. One of the officers walked to Dezeray and told her to pack it up–she had to go. She asked him ‘Why?’ He told her ‘You can’t be in here.’ He then asked her for her I.D. She asked him ‘Why do you need my I.D.?’ She cooperated, she gave him the I.D. and she asked him ‘Am I under arrest? Am I being detained?’ He didn’t answer her. He went on his radio, made a call and checked her I.D.

“Now, while we’re standing there. She’s been coming to the park for 10 years, feeding. Nice organic food, vegan food, coffee, bagels, cereal. This is for people who are less fortunate.”

What did the police say to you about why you weren’t allowed to have food that Dezeray was sharing?

“Apparently, there’s a city ordinance that says: for you to feed, you have to have a permit. But, if you gotta get a permit every week to come in to feed– I don’t know how long a permit lasts or if it’s just for that day or that week or that month– I know this, there are other people who come out, college kids, even some of the workers who work around there come out there and give something to eat to those who don’t have.

“Does the whole city have to have a permit?

“The officer came back. He held her I.D. for about 30 minutes and then he gave it to the bicycle cop. The bicycle cop came to her and said ‘Oh, you’re OK. I know you guys come out here every Tuesday or whatever, but, you’re OK. But, there is an ordinance in effect that you have to have a permit.'”

Do they enforce this ordinance at other times?

“No, they pick and choose.”

So, at the very end was there anyone that was still able to eat or were people turned away?

“Yes, sir. While he had her I.D., people were still walking around. People were still coming up to the table ‘Hey, is there any coffee left, any bagels?’ ‘Aw, yeah.’ She was like ‘Hey, you want a bagel? You want some cereal?’ Is there any coffee? There wasn’t any coffee left. And then one guy walked up, he was so thirsty, he was like ‘Do you have any water or milk?’ She gave him a jug of water, a gallon of water. He was like ‘Oh, man, thank you.’ And the guy was sweating and it’s chilly outside.”

Food Not Bombs says it will feed again this Saturday, in the park. Are you concerned? Is that something you might and go and get food there?

“So, yeah. I’ll be out there Saturday, getting something to eat and supporting Food Not Bombs.”

In 2004, Tampa Police arrested three members of Food Not Bombs for sharing food in public, but moved toward a less draconian response after public outcry.

WMNF News also interviewed Steve Hegarty, public information officer for Tampa Police, who says everything would have been fine if Food Not Bombs had obtained a permit from the city.

“Yeah, we have an ordinance that says that if you’re going to set up table and chairs and everything else, in one of our parks, that you need a permit.

“Today, my understanding is that they set up tables and had coffee makers and everything else out there. They did not have a permit. Now, that’s not to say that somebody can’t feed homeless people. If you or I go through the park and decide we want to share some food with somebody, that’s not a problem. Or there’s some people that do it in a parking lot, somewhere or in a church parking lot, that’s not a problem. But, if you’re going to do a set up like that, in one of the city parks, that’s as if the city is endorsing it and taking responsibility for it. There is an ordinance that says that you need a permit to do that.”

I spoke with someone from Food Not Bombs. I also spoke with a homeless person who was receiving services and they said this happens all the time. Once or twice a week, they do– it sounded like almost exactly what happens today. The only difference was today they were confronted by the Tampa Police and by the Parks and Rec.

“My office is right next to the park and I regularly run downtown. Now, I’ve certainly seen people out feeding the homeless. I don’t recall seeing a whole setup with tables and chairs and coffeemakers. I’ll have to take your word for it that this has happened before. That doesn’t mean that the ordinance is not in effect. I mean, if you get caught for a speeding ticket and you tell the officer that you always do 90 miles an hour, I’m not sure that that really carries any weight.

“If they were violating the ordinance, then we needed to let them know that you need to get a permit to do that.”

Finally, the organizer from Tampa Food Not Bombs told me that they understand that there’s an ordinance, but, they still plan on coming back on Saturday and feeding people there on Saturday. Will they get arrested?

“Well, I hope they get an ordinance. I think it’s wonderful that they want to help people out and that’s not a problem at all. I just hope that they get a permit to do that.”

I think they were implying or even saying that they wouldn’t bother getting a permit.

“Well, that would be a problem.

“Like I said, if you or I or they come down and decide to hand out some box lunches and things like that, I don’t think that that’s a problem. But, there are people–if you spend any time in the park, you’ll see that people sometimes set up a tent and they hand out literature or play music–they all get permits. That’s the way it’s supposed to work.

“So, if they plan on coming out on Saturday, I just hope they do the right thing and get a permit beforehand.”

Food Not Bombs plans another (non-permitted) food sharing on Saturday at 4:00 p.m. at Gaslight Square. That’s around the same time as a major concert associated with the College Football Championship game.