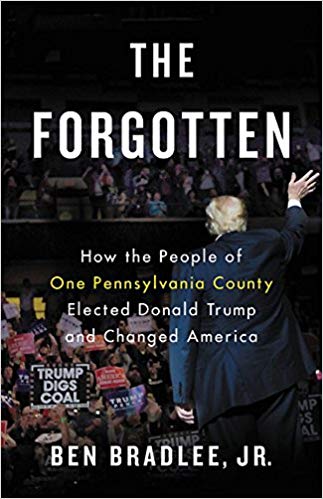 In The Forgotten: How the People of One Pennsylvania County Elected Donald Trump and Changed America, Ben Bradlee Jr. reports on how voters in Luzerne County, a pivotal county in a crucial swing state, came to feel like strangers in their own land – marginalized by flat or falling wages, rapid demographic change, and a liberal culture that mocks their faith and patriotism. Fundamentally rural and struggling with changing demographics and limited opportunity, Luzerne County can be seen as a microcosm of the nation. Trump voters speak for themselves in The Forgotten, explaining how they felt others were

‘cutting in line’ and that the federal government was taking too much money from the employed and giving it to the idle. The loss of breadwinner status, and more importantly, the loss of dignity, primed them for Donald Trump. Bradlee immerses himself among the voters of Luzerne county, hoping to discover why a majority of voters there supported Donald Trump for president. What the award-winning journalist learned in Luzerne County (Wilkes-Barre is the major city in a predominately rural area) will mostly hearten devoted Republican supporters, mostly upset Democratic supporters, and perhaps baffle independent voters. Ben Bradlee Jr. talks with Norman B about his fascinating, ultimately puzzling deep dive into one county’s electoral behaviour.