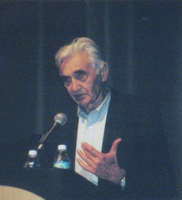 We listen to a speech by esteemed American History Professor and author Howard Zinn, whose best-selling and controversial book A People’s History of the United States looks at American History people of the common people and marginalized groups. Zinn was a combat veteran in WWII, his experiences later shaped his stance aganist the wars in both Vietnam and Iraq. In this 2006 speech he gave in Austin Texas, he talks at length about war and peace.