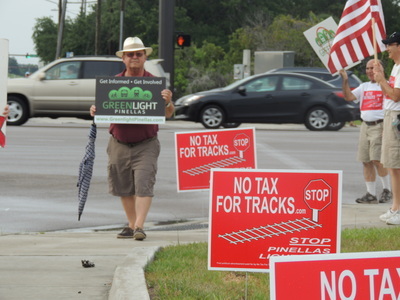 Today on Radioactivity, we hear from both sides in the Greenlight Pinellas debate. Pinellas voters are being asked in this election which culminates next Tuesday to decide whether to raise the sales tax by one cent in order to pay for public transportation improvements- including a light rail line.

First, Rob speaks to two Tampa Bay Times reporters who have been covering transportation issues. Tony Marrero did a story this past weekend profiling people in Pinellas who rely on mass transit. And Robert Trigaux is the business columnist for the Times and he wrote a piece earlier this month comparing how easy it is to commute in similar sized metro areas.

The debate over Greenlight Pinellas:

Kyle Parks the spokesman for Yes on Greenlight, the campaign supporting the Greenlight Pinellas transit referendum.

John Burgess retired- Senior Executive who lived for more than 35 years in the San Francisco area. He’s currently a real estate investment entrepreneur and volunteer
with NoTax For Tracks

If approved by voters next Tuesday Greenlight Pinellas would increase the county’s sales tax from 7 to 8 cents. It would expand bus service and build a light rail line from downtown St. Petersburg- up the east side of St. Petersburg to the Gateway area. The line would then go west through Largo and culminate in downtown Clearwater. Of the $2.2 billion dollars raised by the tax- $1.6 Billion would go toward the train.