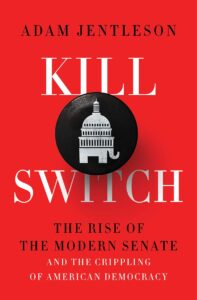 The filibuster stands in the way of Democrats’ hopes in Washington where they do have a slim majority in the House but only a one-vote majority in the Senate (by virtue of the VP vote). And with the filibuster in place Senate Democrats will have to keep their members in line and add at least ten Republicans to support and pass any significant legislation.

Adam Jentleson, is the public affairs director at Democracy Forward and a former deputy chief of staff to Senator Harry Reid. A columnist for GQ and frequent political commentator on MSNBC, Jentleson lives in Takoma Park, Maryland.

Jentleson has written a new book: KILL SWITCH: The Rise of the Modern Senate and the Crippling of American Democracy, (Liveright) . In the book Jentleson charts what he describes us the US Senate’s decline from a great deliberative body to the nexus of partisan gridlock.

This trajectory, Jentleson argues, can be traced back to the early twentieth century and southern senators fighting to protect Jim Crow; they honed a procedural tool to empower, for the first time in American history, a minority of senators to systematically block bills favored by the majority. That procedural tool was the filibuster.