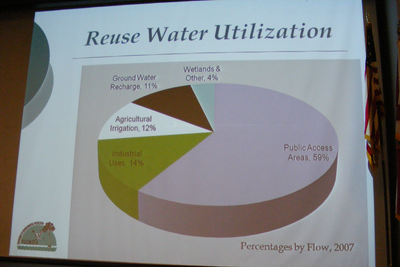 Dirty water may mean disgust, illness and waste for many, but with treatment, it could be made suitable for reuse. Last night the University of South Florida joined city officials with scientists and water management authorities to discuss the future of using reclaimed water in Tampa.

Reclaimed water can be used for many purposes other than just giving people water to drink. It can be used for irrigation, creating wetlands, and can be injected underground to ward off salt water intrusion. The USF College of Public Health and Physicians for Social Responsibility sponsored an event that brought Mehul Patel to Tampa from California to talk about reclaimed water systems. He is the Ground Water Replenishment System process manager for the Orange County water district.

We’re hoping to give our perspective on why we use reclaimed water in California how it can be used and what’s it’s advantages and disadvantages, so that people in Tampa and South Florida considering reclaimed water can have all of the facts as far as from a perspective from someone who’s done it for over 30 years, what to expect and what not to expect, so as long as we educate people then they can make an informed decision.

Microfiltration, followed by reverse osmosis, followed by ultraviolet light with hydrogen peroxide, or what we call an advanced oxidation process. What we’re trying to do is take secondary ethylene, which normally goes to the ocean. We take a portion of that, put it through some fine screens, two millimeter screens, just to take out any large particles, algae that might be in the water, put it right through a microfilter that’s rated at .2 micrometers, or one 300th the size of a human hair diameter, goes through that filter, it’s a low pressure filtration process.

Florida has needed to use reclaimed water in the past year with especially harsh droughts and dry seasons. Jeff Green with the Department of Environmental Protection says that Florida is a national leader in water reuse.

We rank 1 and 2 on any given year with our friends on the west coast California. In fact, in 2008, we were the national leader reusing approx 243 billion gallons of reclaimed water. Here in the southwest district, we do about 180 million gallons a day, which is about 55 percent of domestic waste water treated within the district.

It has been difficult for advocates of reclaimed water, as negative rumors have circulated about the cleanliness of treating and reusing reclaimed water. Valerie Seidel works with the Balmoral group, and says poor public perception has made messaging expensive.

It’s expensive to educate the public. Getting people fired up about standing on the beach to prevent offshore drilling is one thing, but getting them fired up to talk about reclaimed water, you know, is kind of a dry topic. So there’s an expensive undertaking there to educate the public to get them to a point of understanding. Then secondly there’s a great deal of political capital to be expended in order to stand behind this sort of effort. So they’re both expensive endeavors.

But Anthony Andrade of the Southwest Florida Water Management District says that chemicals in the water supply are hardly noticeable. Chemicals like caffeine and DEET, an ingredient of insect repellent, have been found in all kinds of water, and that reclaimed water is no dirtier than basic groundwater.

The presence of these pharmaceuticals and micro-constituents alone is not an indictment of recaimed water use. Indeed it has been found that it may not even be associated with reclaimed water use because they were found in influenced and non-influenced.

Tampa Bay Water was formed following lengthy litigation during the “Water Wars” in the 1970s. Paula Dye is the strategic planning manager for Tampa Bay Water, and says that while reclaimed water is necessary for conservation, recent rainfall has filled the regional reservoir.

And thank goodness the rain has finally come back, and as a result of the rainfall we’ve gotten in the last couple of months, we have been able to fill the regional reservoir to over 15 billion gallons. It is at capacity and full today. That will help us immensely in the next dry season.

And Dye says this has allowed for a cutback in production.

We have cut back our production on the long-standing well fields that were having environmental problems around them as a result of over production. We’ve cut back that permitted supply by over 100 million gallons a day. That’s actually very unusual to have done. When I say that in other areas of the country at presentations, most of the people in the room physically gasp because it’s just not a heard-of thing to cut back on your permitted capacity. But our members came together and did that voluntarily to protect the environment.

California’s groundwater recharge program could provide useful information for Florida, which may also need to inject the ground with reclaimed water in the future to stave off saltwater intrusion. More information about the presentations will be available on USF’s College of Public Health website soon.