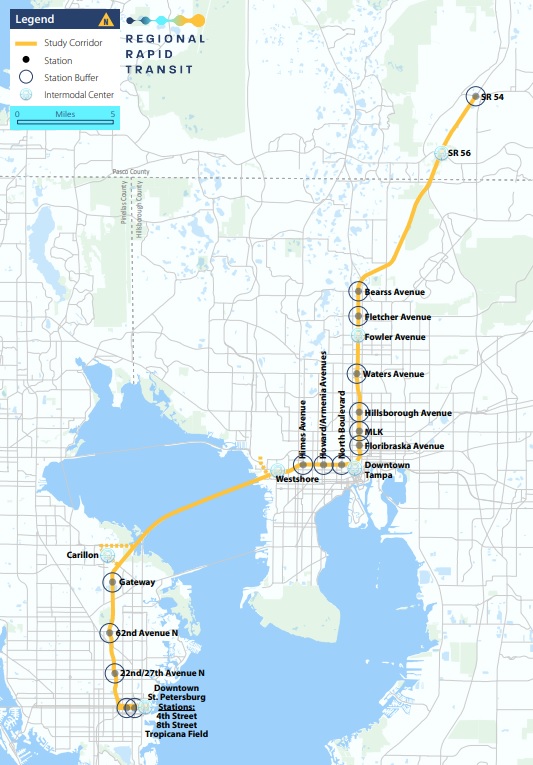 A proposed express bus service from Wesley Chapel, through Tampa to St. Petersburg now has a name and seems to be moving forward; Regional Rapid Transit is bus service that would travel mostly along Interstate-275 with fewer stops than a typical bus. Some mass transit supporters oppose the plan, in part because it won’t be a true “bus rapid transit” line. But it’s supported by Pinellas County’s transit agency. Brad Miller is the CEO of PSTA.

“It’s just starting its design. It’s in PD&E preliminary design now. It will be in the running. It’s got to be designed. And it needs to be competitive in the federal process to get the federal funds. So it’s a few years out. But it’s shaping this, as I said before, this idea of having a backbone system for the whole region.

“It’s very important for Pinellas County residents to know that they have a congestion-free option to get to Tampa. There’s so many jobs, and so many great things in Tampa that we need to get to. And Howard Frankland Bridge is so congested like 24/7 it seems. That we need this option to avoid, have a way around, the congestion. So we’re very excited about it. But that will be in a future year.”

Some conservative groups oppose more bus service in the area.

For example, Barbara Haselden with the group Save Our Streets is against the planned “Central Avenue Bus Rapid Transit” route from downtown St. Pete to St. Pete Beach because it would turn a traffic lane into a dedicated bus lane in each direction. She says that would contribute to traffic congestion. But she hasn’t made up her mind yet on the proposed Regional Rapid Transit bus route from St. Petersburg to Wesley Chapel.

“I am willing and anxious to learn more about all the plans on the ‘BRT’ that would be what you’re describing that the TBARTA is releasing. So I’m not in opposition or in support of that at this time. However, I’m a very strong opposition to the Central Avenue BRT because it’s unnecessary, really, pretty massive project down here in St Petersburg. It’s going to impinge on people’s ability for ease of mobility and using their personal vehicle & it’s not necessary.”

“I have issues with the fact that it’s not transit. They keep calling it BRT (“bus rapid transit”). But I think even to call transit is not true.

“It is a $455 million project with $430 million spent on what they’re calling multi-modal centers. When you hear the word multi-modal center — you know, I said, ‘what are the multi-modals?’ No one could ever explain this to me. What they actually are, are parking garages.

But this whole project is not really focused around transit. It’s not about transit. If it was, we could do it tomorrow, because we could just be putting the buses on the lanes and running them.

“It’s a fraud project like none other in the nation. There’s nothing this poor anywhere else. It’s really not a serious attempt to deal with anything remotely related to transit, in my evaluation.”

“This regional rapid transit line won’t be, really, a bus rapid transit. Because, like you said, it’ll go along the highway. The highway is elevated in certain spots. So its stations will be much longer distances between stations. And then when the vehicles get off the highway, they’ll access stations that a lot of people will have to drive a car to catch, to get onto the transit. So there will need to be parking.

“But, there’s lots of transit systems out there that are just like that. I’ve worked for commuter rail organizations which have very large parking facilities at each one of their stations. So, it’s very traditional.

“I think the regional rapid transit, if you look at the overall cost, because it’s taking advantage of the highway infrastructure, there is very little cost in the overall project related to that. Because the highway is already there. So the biggest cost element is providing those stations and the parking to get people to the transit.”