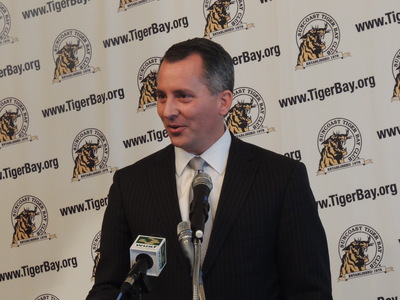 Congress member David Jolly doesn’t want Baghdad to be the next Benghazi. During a political forum in St. Petersburg Monday the Pinellas County Republican fielded questions about the Sunni insurgency that has taken control of parts of northern Iraq.

“We have thousands of Americans at the Baghdad embassy right now in Iraq that is being marched on and the president should recognize the danger and threat that is posed to them and should afford enough intervention to protect their lives just as he did Bowe Bergdahl and frankly, in my opinion, respond more quickly than they responded in Libya to prevent another Libya from happening again.”

During speeches last week about how to handle a surge of terrorists making their way toward the Iraqi capital, President Barack Obama said he doesn’t support putting boots on the ground, but other intervention options including air strikes are still on the table. Jolly blended the issue with the recent release of America’s only prisoner of war in Afghanistan that resulted in five known Taliban operatives being released from Guantanamo Bay.

The president has fallen under harsh criticism from Republicans and some Democrats for negotiating the prisoner swap. The administration argues the hushed deal was necessary to save Bergdahl. Jolly said it was important to ensure the U.S. Army sergeant’s safety, but takes issue with how it was done. But he condemned those who argue Berdahl was only captured because he left his post.

“Nobody in the Congress of the United States should judge how he fell into the hands of the prisoners. The army will work that out itself. That’s not a political issue and not one that’s appropriate for Congress to talk about.”

Jolly also responded to failures in the Veteran’s Administration, which have resulted in preventable deaths due to long wait lists at facilities. There’s a proposal on the table to allow vets to seek private care if they live too far away from a VA hospital or have been waiting for care more than 30 days. Jolly said that’s a start, but it’s not enough.

“If you’re a veteran and you would prefer to go outside of the system, is there a way to ensure that you can go either or. But secondly, the idea I would like to see us explore more is if the issue is a failure of integrity among the leadership within the healthcare system then why don’t we address management? Why don’t we look at whether or not we should competitively award management contracts for VA hospital systems and award them to private healthcare providers that run regional systems everyday and have very different results than the system that’s resulted in the death of its own patients?

His insistence that the VA Department undergo serious reform led to an enraged question from Pinellas County School Board member Linda Lerner.

“What about the 800,000 uninsured Floridians, many who are dying? And what about the $55 billion of our taxpayer dollars in Florida going to other states? What will you do to influence Tallahassee?

Speaking at a Suncoast Tiger Bay luncheon, Jolly deferred the issue to state lawmakers, but suggested the question could be posed in a different way.

“Should we burden our state with an obligation of $3 billion a year in years 2019 through 2022? I don’t know the answer to that. That’s worthy of the debate.”

Jolly was elected to Congress during a special election in March. He faces another election in November against Libertarian Lucas Overby and a write-in. There isn’t a Democratic challenger in that race.