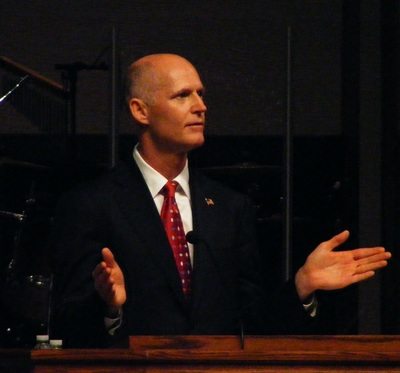 As reported by Janelle Irwin in Saintpetersblog:

With all the buzz over this week’s fangate during the beginning of the Florida Governor’s debate, not too much else has been talked about. Gov. Rick Scott’s refusal to debate his opponent Charlie Crist during the first moments was perhaps the most awkward start to a debate ever.

In a tweet from former Gov. Crist today, he wants to make sure people are paying attention to another part of the debate.

“The beginning of ‪#flgovdebate got a whole lot of attention – but I hope you’ll watch how the debate ended, too,” Crist tweeted with a link to the closing statements of the hour-long debate.

Now, I’m not sure which is the case here – is he hoping people will listen to his brief synopsis about investing in Florida businesses and preserving the Sunshine State’s beautiful waterways or is he sarcastically calling attention to another awkward debate moment in which Scott stumbles his way through a closing statement in which he was about as nervous as an 11-year-old giving a speech in front of snickering classmates.

“I want to thank by – again thanking my wife for standing by me through thick and thin. My mom’s watching from heaven. I want to thank her for being willing to divorce an abusive husband,” Scott stuttered.

Wait, what? Of all the things to thank your mom for in front of a live television audience, that’s a bit personal, no?

“I want to thank my daughters and, for, um, um, you know, for being such great, um, members of our family,” Scott continued with awkward pauses and mispronounced words.

As a Reddit user pointed out following the debate, “he cannot remember that his daughters are family members … He seems completely lobotomized and/or not human.”

Scott then goes on to make his one and only actual point during the closing statement and it’s not hard to guess what that was. Jobs. Jobs. Jobs.

“We’re on a roll,” he said before going back to weird. Scott then launched into a ‘vote for me’ plea … in Spanish. Not good Spanish. Gringo, I’m reading off of a teleprompter Spanish.

So, Crist could have been subtly urging people to watch that little spiel in horror. Or he could be genuinely proud of his shining star (by comparison) of a closing statement.

“You’ve seen the differences between Rick Scott and myself,” Crist starts off. “I want to make sure that we invest in Florida businesses first, that they have a chance to employ more people instead of bringing big corporations from outside our state.”

He then talks about his commitment to the environment and protecting Florida’s water and habitats.

“I want to make sure for future generations, they have the opportunity to enjoy the beauty of this great state,” he continued before wrapping up by asking for votes and the typical “God Bless.”

It was a good closing, for sure, but my money is on him highlighting Scott’s bad one.