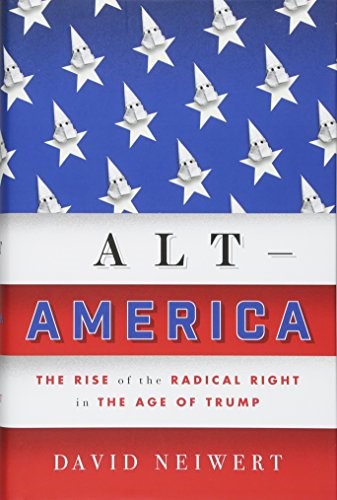 During last year’s presidential campaign and now in the 13 months since the election—right wing speakers and groups have become more emboldened in America. From the violence in Charlottesville, to white nationalist Richard Spencer’s speech in Gainesville in October, to the increased visibility of KKK and neo Nazi groups—the far right has come out of the shadows. After the defeat of Nazis during World War Two and the defeat of the Ku Klux Klan by the non-violent civil rights movement—the far right laid low in this country. Emerging only from time to time.
Our next guest says that these groups like Posse Comitatus, the
Patriots, the Klu Klux Klan, and the Minutemen never really
went away. Rather, they evolved into a new generation of
groups from The Tea Party, Three Percenters, and the Knights
Party, to law enforcement-focused groups like the CSPOA
and Oath Keepers. Banded together they have rebranded as
the Alt-Right.
Our guest- author David Neiwert examines the Alt-Right a
populist movement that has aligned itself with President Trump and the Republican Party.

His new book is ALT AMERICA: THE RISE OF THE RADICAL RIGHT IN THE AGE OF TRUMP (Verso)
I spoke with him last week.