WMNF will be broadcasting a special 2-hour version of Democracy Now the next two weeks. The broadcast, 9-11am, will cover first the Republican (RNC) Convention in Cleveland, July 18-21, and then the Democratic  (DNC) Convention in Philadelphia, July 25-28.

Here is a look at some of the areas the RNC vowed to change after the last presidential election. All images taken from the report (except the ice cream sandwiches).

In March, 2013, the Republican National Committee released a report on its own failures during the 2012 presidential election.  It looked like the party did it correctly, polling, interviewing and surveying almost 40,000 people, including those who had left the Republican Party for various reasons.  After illustrating how many people were involved, it kicked off with this very clear message:

Right now there are 31 Republican governors in the US, and 19 Democrats. The RNC’s report of 2013 writes about how to emulate what is happening in the states. Likely Republican presidential nominee Donald Trump just chose the Republican Governor of Indiana, Mike Pence, as his partner on the ticket.

The report lays out strategies to connect better with American demographic groups that the RNC identified as not strongly supporting Republicans: Hispanics (their term), Asian/Pacific Islanders, African Americans, Women, and Youth. Various strategies are floated, but all starting with a version of don’t alienate them.

A core way to connect with Hispanics, according to the report, is for Republicans to pass comprehensive immigration reform. This is sure to be HUGE at the convetion.

The report recommends that Republicans embrace early voting and absentee voting programs, since they are becoming more popular with the electorate.  The next big recommendations are for the party to close the digital divide with the Democrats; train state operatives to be better at using data; increase voter contact in multiple ways and register more voters.

Much of the report is rightfully geared toward the mechanics of running a party and campaigns. One area that the report recommends stepping up in the game is defining the Democrats, as they feel the D’s (as they call them) define them.  The report states that ‘Well-funded conservative groups should seek to hire activists to track Democrat incumbents and candidates with video cameras constantly recording their every movement, utterance, and action. Within the applicable legal constraints, we need to create our own video content, bank it, and release it when it suits our own candidates’ needs.’

You might remember that in 2006 George Allen was caught on cell phone video calling a volunteer for his opponent ‘macaca’, which is believed to have led to his loss in the Virginia Senate election that year. In 2012, Mitt Romney caught on video talking about the ’47 percent…who are dependent on government, who believe they are victims…These are people who pay no income tax.’ Video was not the Republican candidates’ friend. Though in 2009 James O’Keefe had released misleading videos that ended up bringing down the group ACORN (who helped establish WMNF so long ago). Conservatives’ use of video was not unheard of. James O’Keefe created other videos, and David Daleiden released misleading videos about Planned Parenthood in 2015.

The RNC and the Republican Party are very, very good at raising money. But the McCain-Feingold act is said to ‘place onerous constrictions’ on the party’s ability to grassroots fundraise, shifting a lot of money and power over to other entities. There is a lot in the report about changing on state and national laws and regulations. The Supreme Court rulings on Citizens United and McCutcheon certainly shifted some money back to RNC controlled spending, but there might be calls at the convention to further loosen fundraising restrictions. Ballotpedia has a good timeline of campaign finance reform. 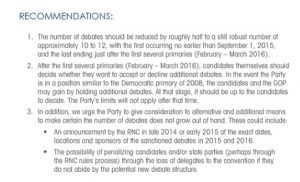 One clear success from the report–though it might have seemed that there were A LOT of Republican debates during the primaries, there were only 12. In contrast, there were 20 Republican primary debates in 2012.  The first one in this cycle was on August 6, 2015, which almost hit the proposed target. This proposal did not go over well with the Tea Party part of the Republican Party.

The report stated it was important to move the convention to an earlier time in the summer so the candidate would have more time to raise money for the general election. The last RNC convention, held in Tampa, was August 27-30th.

Having more primaries and less caucuses was a also a very contentious area. Supporters of Rand Paul and other lesser known candidates said the caucuses and debates gave voters a better chance to know their candidates. *

RNC Chair Reince Priebus responded, at the time, to the criticism saying changes were needed to keep the primaries from hurting the final candidate. *  This Republican Convention could be interesting to watch, to see how the establishment GOP interacts with the insurgent Trump supporters and the weakened official Tea Party.

We will have preview next week of the DNC.