Home WMNF News Roe V. Wade turned 48 Friday and women are still fighting to save it 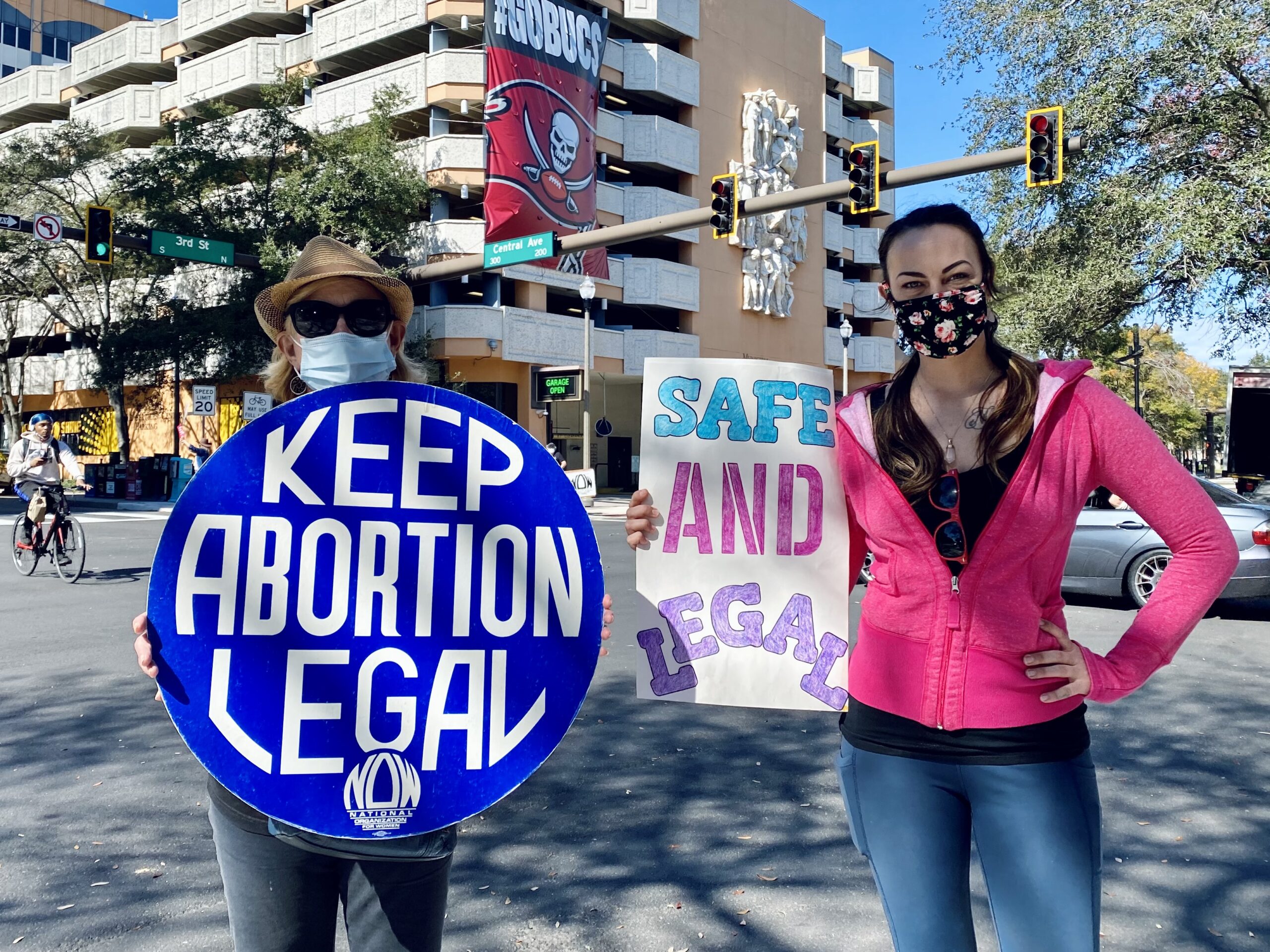 As they’ve done for more than two decades, members of the Pinellas County National Organization of Women – and more recently Progress Florida – gathered in downtown St. Petersburg to celebrate the ruling.

“I’m Amy Weintraub and I’m the reproductive rights program director for Progress Florida. Today is the anniversary of the Roe v. Wade Decision. It was the Supreme Court decision from 1973, which basically guaranteed women, people, the right to abortion care.”

‘We believe in choice’

The group of mostly women stood on each corner of the intersection at Central Avenue and Third Street for an hour Friday afternoon. Some, like 71-year-old Marilyn Halfling, have been fighting for reproductive rights since the ‘70s. Though there were no protesters at the sign-waving event this year, she said it’s been contentious in years past.

“The worst are the guys, actually. These ‘Evangelical Christian’ guys who are accusing everybody of being killers,” Halfling said. “Who think that because we believe in choice we’re counseling people to have abortions and that’s not true. We want them to make an informed choice.”

Despite having been decided almost 50 years ago, access to abortion is still an issue for many women across the country. Many state legislatures have attempted to undermine the decision by passing laws to restrict abortion access. Some laws have become so restrictive that certain states have only one location where women can get an abortion if any at all.

On Friday, Republicans in Kansas pushed a proposed anti-abortion amendment to the state Constitution through the Kansas House.

And with anti-abortion groups still pushing to overturn Roe v. Wade, Weintraub said it’s more important than ever to fight for the right to choose.

“With the newly conservative Supreme Court we just don’t know what to do with the cases they have pending,” she said. “We need bodily autonomy we need to decide when we’re going to become parents. We need to decide if we want to continue a pregnancy. It is a basic foundation of gender equality.”

Almost 15 years ago, 30-year-old Natashia Milburn had to make that decision.

“I had an abortion at 16,” Milburn said. “And honestly, if I would have not, my life would not be where I’m at now. After that, I joined the military and I’m working for the University (of South Florida) for sexual health education.”

Milburn spent 4.5 years in the Air Force before going to college. Now, she’s working with USF to create a comprehensive sexual education program for young women in the foster care system. She said she hopes to empower them with education and knowledge to make choices in a way she wasn’t.

Milburn said a Catholic upbringing and limited sexual education in school built a stigma around sex. But as she matured, she became curious and became sexual active as a teenager.

“I just did it without knowing anything about it. I ended up getting pregnant. It was scary. I was 16 and didn’t know what to do.”

Her older sister had become a teenage mother. Milburn saw how it changed her sister’s life and knew she wasn’t ready. A Michigan resident at the time, she wasn’t able to get an abortion there. After talking it over with her boyfriend, they drove to Chicago to have the procedure done.

She said the choice was right for her, but might not be right for some. The importance of having the ability to choose, and the tools to do so wisely, however, is why she stood on that corner this year, like she did last year and will for years to come.

For Milburn, supporting safe and legal access to abortion isn’t about advocating for abortions to occur, but for women to make the best choice for themselves, whatever it ends up being.

“The government shouldn’t interfere with things like this,” Milburn said. “It’s our lives. Our whole lives. It’s a life-changing event, one of the biggest ones. And yeah, choice matters. Absolutely. Completely.”

Weintraub added reproductive rights is about choosing to have a healthy human experience.

Weintraub said as long as those freedoms are under threat, she will be out every year. And probably, even when they’re safe.

“Even when it’s not in danger,” she said, “we’ll celebrate access to care then.”