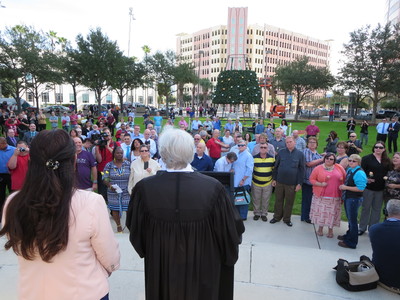 Same-sex couples are rejoicing as they legally tie the knot in Florida Tuesday. In St. Petersburg about twenty couples lined up in front of the Pinellas County courthouse steps before the doors opened at 8:00 a.m.

After about 30 minutes of paperwork the first couple, Andrea DeFlippo and Erin Bell, were escorted into a small room cramped with reporters. Arricka Grant, performed the ceremony. Pinellas County Clerk of Courts St Pete branch manager, Vel Anderson, said that preparations had been made for a big turnout.

But unlike Pinellas and most other Florida counties, some clerks of court are issuing licenses but are declining to perform wedding ceremonies for either same-sex or opposite-sex couples. In effect, this forces all couples to find a notary public like a judicial officer or ordained minister to perform the marriage ceremony. Reverend Candice Schultis, of the King of Peace Metropolitan Church, was at the Pinellas courthouse.

Florida Attorney General Pam Bondi has tried to appeal to the U.S. Supreme Court to halt same-sex marriage in Florida. Her requests were denied by America’s highest court. Miami-Dade County got a jump-start on the rest of the state yesterday on same-sex marriages. Bondi issued a terse comment through her spokesperson: “The judge has ruled, and we wish these couples the best.” One Pinellas County couple, Bob Wallis and Joe Joe Wallis, arrived at the courthouse early to get their marriage license but waited until the afternoon to be married by St. Pete Mayor Rick Kriseman. Bob Wallis, said justice and equality have been a long time coming.

Across the Bay in Tampa, Pat Frank, Hillsborough County Clerk of the Courts, held a group ceremony at noon at the Joe Chillura Park for more than 100 couples. In her office before the ceremony, Frank had this to say about moving forward on LGBT issues.

While Florida is now the 36th state to approve same-sex marriage, 14 others still do not allow gay couples to legally wed. The U.S. Supreme Court will review several cases at their conference this Friday.