Home WMNF News Arab Americans Sami Al-Arian deported: “my time in the U.S. has come to an end” 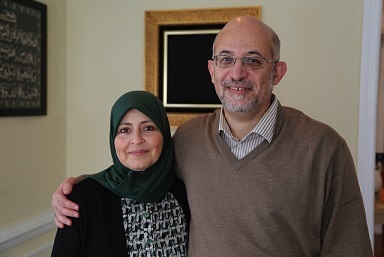 Update: On Wednesday afternoon one of their daughters confirmed to WMNF News that Sami and Nahla Al-Arian had arrived in their new country, Turkey. In the days to come we’ll bring you more on this story.

Former USF professor Sami Al-Arian was deported from the U.S. late Wednesday night; in an online statement he thanked friends and supporters, writing, “We look forward to the journey ahead and take with us the countless happy memories we formed during our life in the United States.”

The statement was posted overnight on the website freesamialarian.com and is reproduced in full below.

In a 2005, a jury found Al-Arian not guilty on a range of terrorism-related charges, but were deadlocked on nine others. Rather than go through another trial on those charges, in 2006 Al-Arian agreed to a plea deal that would allow him to be released from prison but require him to be deported.

Instead Al-Arian was called to testify in an unrelated grand jury investigation in Virginia. But he refused and remained in prison in contempt of court.

He was released from prison under house arrest in suburban Washington, D.C. in 2009, but all charges were dropped last year.

This link has WMNF’s complete coverage of Sami Al-Arian.

Below is a statement posted on freesamialarian.com overnight:

A Statement by Dr. Sami A. Al-Arian

To my dear friends and supporters,

After 40 years, my time in the U.S. has come to an end. Like many immigrants of my generation, I came to the U.S. in 1975 to seek a higher education and greater opportunities. But I also wanted to live in a free society where freedom of speech, association and religion are not only tolerated but guaranteed and protected under the law. That’s why I decided to stay and raise my family here, after earning my doctorate in 1986. Simply put, to me, freedom of speech and thought represented the cornerstone of a dignified life.

Today, freedom of expression has become a defining feature in the struggle to realize our humanity and liberty. The forces of intolerance, hegemony, and exclusionary politics tend to favor the stifling of free speech and the suppression of dissent. But nothing is more dangerous than when such suppression is perpetrated and sanctioned by government. As one early American once observed, “When the people fear their government, there is tyranny; when the government fears the people, there is liberty.” Because government has enormous power and authority over its people, such control must be checked, and people, especially those advocating unpopular opinions, must have absolute protections from governmental overreach and abuse of power. A case in point of course is the issue of Palestinian self-determination. In the United States, as well as in many other western countries, those who support the Palestinian struggle for justice, and criticize Israel’s occupation and brutal policies, have often experienced an assault on their freedom of speech in academia, media, politics and society at large. After the tragic events of September 11th, such actions by the government intensified, in the name of security. Far too many people have been targeted and punished because of their unpopular opinions or beliefs.

During their opening statement in my trial in June 2005, my lawyers showed the jury two poster-sized photographs of items that government agents took during searches of my home many years earlier. In one photo, there were several stacks of books taken from my home library. The other photo showed a small gun I owned at the time. The attorney looked the jury in the eyes and said: “This is what this case is about. When the government raided my client’s house, this is what they seized,” he said, pointing to the books, “and this is what they left,” he added, pointing to the gun in the other picture. “This case is not about terrorism but about my client’s right to freedom of speech,” he continued. Indeed, much of the evidence the government presented to the jury during the six-month trial were speeches I delivered, lectures I presented, articles I wrote, magazines I edited, books I owned, conferences I convened, rallies I attended, interviews I gave, news I heard, and websites I never even accessed. But the most disturbing part of the trial was not that the government offered my speeches, opinions, books, writings, and dreams into evidence, but that an intimidated judicial system allowed them to be admitted into evidence. That’s why we applauded the jury’s verdict. Our jurors represented the best society had to offer. Despite all of the fear-mongering and scare tactics used by the authorities, the jury acted as free people, people of conscience, able to see through Big Brother’s tactics. One hard lesson that must be learned from the trial is that political cases should have no place in a free and democratic society.

But despite the long and arduous ordeal and hardships suffered by my family, I leave with no bitterness or resentment in my heart whatsoever. In fact, I’m very grateful for the opportunities and experiences afforded to me and my family in this country, and for the friendships we’ve cultivated over the decades. These are lifelong connections that could never be affected by distance.

I would like to thank God for all the blessings in my life. My faith sustained me during my many months in solitary confinement and gave me comfort that justice would ultimately prevail.

Our deep thanks go to the friends and supporters across the U.S., from university professors to grassroots activists, individuals and organizations, who have stood alongside us in the struggle for justice.

My trial attorneys, Linda Moreno and the late Bill Moffitt, were the best advocates anyone could ask for, both inside and outside of the courtroom. Their spirit, intelligence, passion and principle were inspirational to so many.

I am also grateful to Jonathan Turley and his legal team, whose tireless efforts saw the case to its conclusion. Jonathan’s commitment to justice and brilliant legal representation resulted in the government finally dropping the case.

Our gratitude also goes to my immigration lawyers, Ira Kurzban and John Pratt, for the tremendous work they did in smoothing the way for this next phase of our lives.

Thanks also to my children for their patience, perseverance and support during the challenges of the last decade. I am so proud of them.

Finally, my wife Nahla h​as been a pillar of love, strength and resilience. She kept our family together during the most difficult times. There are no words to convey the extent of my gratitude.

We look forward to the journey ahead and take with us the countless happy memories we formed during our life in the United States.