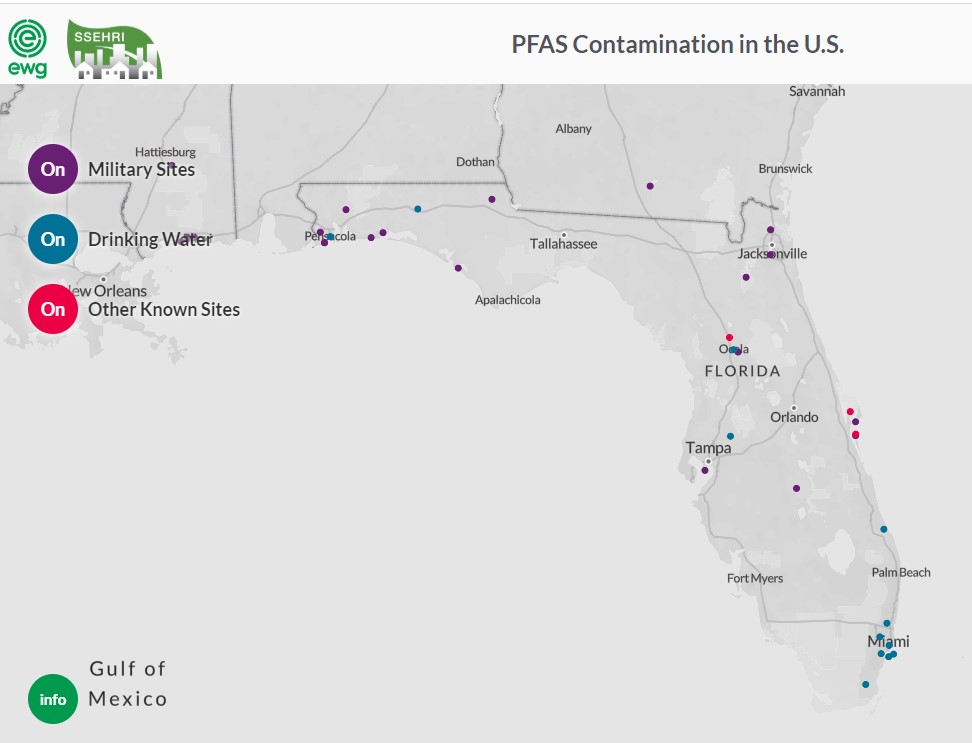 The level of “forever chemicals” contaminating groundwater at Tampa’s MacDill Air Force Base is a “huge red flag.” That’s according to a science analyst who co-authored a new report by the Environmental Working Group about a class of chemicals collectively known as PFAS.

“[They] found incredibly high levels of PFAS in groundwater [at MacDill AFB]. So, not necessarily drinking water, but groundwater on the base. However, this is a huge red flag because anyone in the area – you know these don’t go away over time.

You found PFBS, PFOA, PFOS and the combination of PFOS + PFOA at extremely high levels on MacDill Air Force Base in Tampa. What types of health concerns should people be aware about for those chemicals at those levels?

“Based on the research that has been done, they all have similar types of toxicities. So, we’re going to go back to the different kinds of cancers: those testicular, kidney, liver cancer.

“And one of the really concerning ones that EWG has based our health guideline on is weakened childhood immunity and reduced effectiveness of vaccines. Because when you’re looking at cancer, of course, that’s an exposure over a lifetime. But when you start seeing effects like that in children, that’s a smaller window of effect.

“So we really recommend that people, if they’re in these areas of contamination, either filter their water. Or at least reach out to the local health officials. Because when you see really, really high levels – like what was found at this Air Force base – there’s a good chance that the local officials are aware and may have taken action. However, if you’re concerned, you should definitely reach out to your local officials to find out what’s going on in your community and what’s being done.”

A Tampa Bay Times report from 2017 quotes MacDill officials as saying they will continue testing and will take corrective action if any problems are found on the base.

In 2014 PFAS were found in the drinking water of the City of Zephyrhills. But the city’s utility website says its drinking water system is not under a health advisory. It has removed a well from service that tested for PFAS in 2016 and the city continues to monitor it.