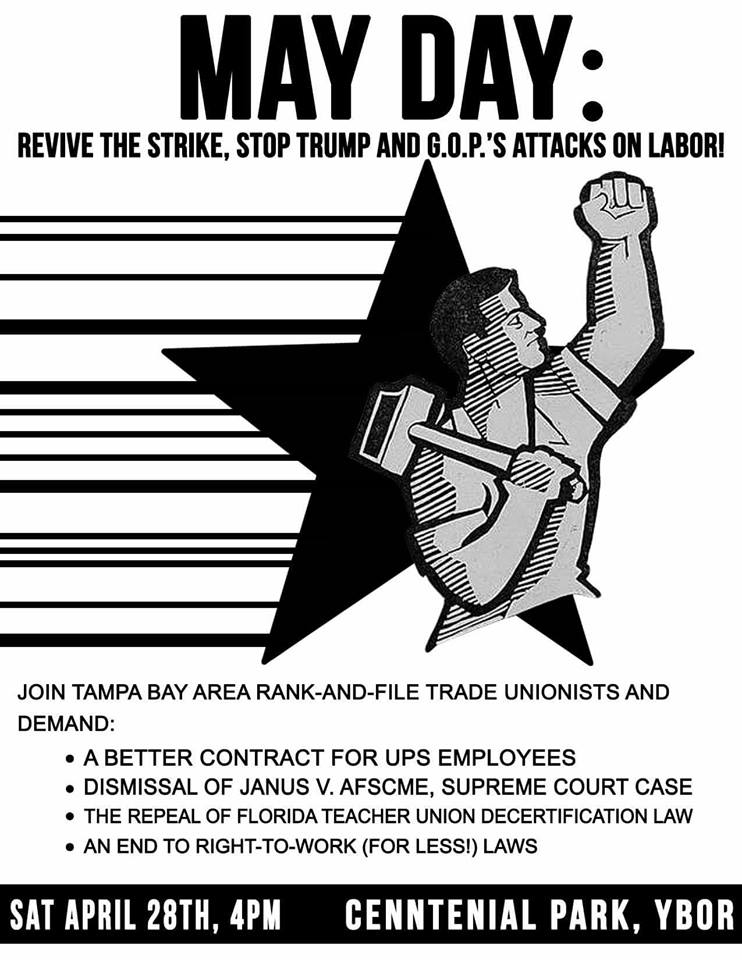 On MidPoint we asked listeners their thoughts about the latest U.S. / allied missile strikes on Syria. We also spoke about some upcoming actions by Students for a Democratic Society – a May Day rally in Ybor City and a sanctuary campus event at USF.

SDS rallies: at USF for sanctuary campus and in Ybor for May Day

Students for a Democratic Society has two events coming up this month.

This Wednesday there’s a protest at USF around SDS’s demand for a sanctuary campus and for support for DACA (Deferred Action for Childhood Arrivals). Our guests in the studio were Jerrica Hoey and Will Blake with Students for a Democratic Society. The protest is Wednesday, April 18 at 4:45 p.m. outside the USF Tampa Marshall Student Center / SVC.

They’re also hosting a May Day rally in Ybor City later this month. It’s on Saturday April 28 at 4:00 p.m. at Centennial Park. A flyer for the event lists four concerns:

One organizer of another May Day rally phoned in during the show. That one is on May 1 at 4:30 p.m. and includes a march from downtown Tampa’s Curtis Hixon Waterfront Park to Centennial Park in Ybor City.

It was phoned in by Kara Malin, co-chair of Tampa Bay Democratic Socialists of America.

We also heard the latest about Friday’s airstrikes on Syria by the U.S. / U.K. and France and took calls from listeners.

We heard part of a speech from Monday by British Prime Minister Teresa May addressing Parliament about why the U.K. helped attack Syria on Friday.

On Twitter @Airwars writes that its researchers concluded “that single-source claim of 4 civilians killed in Damascus in recent US strikes is not credible – with no other source, including state media, making claims. Three civilians were however likely injured at Homs, according to multiple reports”

We also heard two comments left by listeners after our last show. It was about several topics including Florida Governor Rick Scott’s announcement that he’s running for U.S. Senate. And an organizer of a Tampa protest against the Israeli attacks on Palestinian demonstrators and journalists.