Home Blog News and Public Affairs Sleepwalking to Nuclear War? And President Trump Is About to Change US Policy Toward Israel. 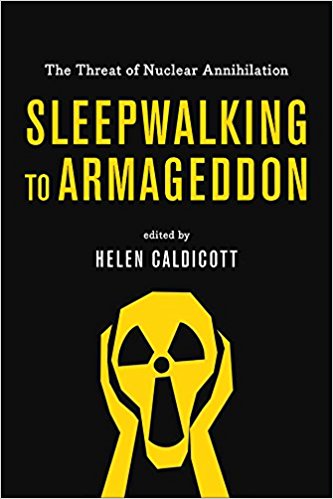 Radioactivity 12 6 17
Welcome to Radioactivity. I’m Rob Lorei. Coming up— our first guest warns that the biggest danger facing the world is the threat of nuclear war.
Later we’ll discuss President Trump’s planned announcement that he will move the US embassy in Israel from Tel Aviv to Jerusalem. The move has caused outrage in the Middle East—especially with US allies Turkey and Jordan. We’ll speak with an Israeli peace activist.

Our first guest is Dr. Helen Caldicott- who is a pediatrician, co founder of Physicians for Social Responsibility and a long time opponent of both nuclear weapons and nuclear power. She’s the editor of a new book called SLEEPWALKING TO ARMAGEDDON (The New Press) in which she and other experts on nuclear weapons say that the greatest threat to the world is nuclear war. With tensions high between the US and North Korea, proxy wars in the Middle east and the ongoing hostility between Pakistan and India and Russia’s opposition to NATO expansion— Caldicott says the danger is real.

Next, leaders of major Christian denominations in the Holy Land have appealed to President Trump to rethink his expected decision to recognize Jerusalem as Israel’s capital. They say in a letter that Trump’s steps will mean “increased hatred, conflict, violence and suffering in Jerusalem and the Holy Land.” Their letter asks Trump to walk toward “more love and a definitive peace” by continuing to recognize the international status of Jerusalem.
JERUSALEM (AP) — President Trump’s expected declaration of Jerusalem as Israel’s capital later today is likely to send shockwaves across the region by ending longtime U.S. policy on one of the core issues in the decades-long Israeli-Palestinian conflict. Jerusalem is home to major Jewish, Christian and Muslim holy sites, and previous moves seen as altering its status have ignited violent protests.

Our next guest is a veteran of the Israeli Military.He is an Israeli peace activist who spends his time between Jerusalem and San Diego. His grandfather was one of the founding fathers of Israel and signed Israeli declaration of Independence. His father was a general and member of parliament. He has lost a family member to terrorism. He writes about his family and what it was like growing up in Israel in his memoir, The General’s Son. Peled has lectured around the world in his campaign to promote justice, democracy, and equal rights for Palestinians and Israelis. He joins us now.

In September of this year the American Jewish Committee released a report saying that forty-four per cent of American Jews do not support the US President Donald Trump’s suggestion of moving the US embassy from Tel Aviv to Jerusalem.
, the American Jewish Committee (AJC)’s survey revealed yesterday.
The survey, which is conducted every year, was based on telephone interviews carried out in August, incorporating a national sample of 1,000 American Jews aged 18 and over. Nine per cent were Orthodox Jews, 16 per cent identified with the Conservative movement, 31 per cent were Reform Jews, two per cent Reconstructionists and 39 per cent who consider themselves “just Jewish”.
Thirty-six per cent of the survey’s respondents said that they would be in favor of the embassy’s relocation only in conjunction with a clear progress in the Israeli-Palestinian peace process.
16 per cent believe the embassy should be moved “immediately”, while four per cent were “not sure”.
The poll showed that 65 per cent of the interviewees see that there has been no progress in the peace process between both the Israeli and the Palestinian sides, compared to previous years.
Of the respondents, 77 per cent had an “unfavorable” view of US President Donald Trump, while 21 per cent favor the way he is governing and performing in his job. Sixty-four per cent had voted for Hillary Clinton in last year’s election while only 18 per cent voted Trump.
Some seven million Jews live in the United Sates, according to official data released in 2014.