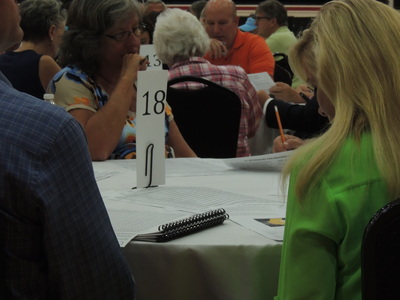 The St. Petersburg Pier has been shuttered for more than a year now. The city is hoping to come up with a solid plan to replace the iconic inverted pyramid. During the second of five public meetings Tuesday night, an advisory group convened by Mayor Rick Kriseman took notes on what citizens are looking for in a new design. Tracy Weber came prepared with a ten-page packet.

“…that incorporates a Spanish colonial village, an ambiance to mimic St. Petersburg historical landmarks like the Vinoy and the Don Cesar. The inside would be like a similar airplane hangar feature or a dome top that provides sun and rain protection.”

In addition to public comment, residents sat at numbered tables with a survey. Categories included things like dining, retail, entertainment and transportation. There are also questions about whether there should be attractions like a ferris wheel or a water park. There’s space at the bottom to write-in unique ideas. Warren Parham said a new pier should be fun and marketable.

“Turn it into a mini Disney World or Coney Island without getting really cheesy. Just give the down home feel of what Pinellas County, downtown St. Pete and the surrounding areas have to offer. Utilize that with all the shopping and the restaurants and the whole schmeer that you put it all together and just really fine tune it so families can enjoy it. They can make it romantic. Do a gondola instead of a tram. Just utilize everything and promote it, advertise it, get it out there.”

Volunteers on the Pier advisory committee are tallying the results from the survey. Residents rate each item on a scale from one to five. They’ve already received more than 1,000 entries. St. Pete resident Tom Strickland came up with his own idea for a new pier two years ago called Marina Bay Market. It includes boat slips, retail, pedestrian walkways and an observation deck. His plan also has a “market square” for an impromptu entertainment event. But whatever design is chosen, Strickland encourages the city to look into a public private partnerships to stretch its dollars.

“I’m not taking a dig at the city of St. Pete, but city governments were never developed to be a developer nor a property manager. There’s hundreds of communities around the United States who have done this, very, very successfully from court houses to bridges to highways to entertainment complexes.”

The city has a little less than $50 million to spend on replacing the pier. Restoring the old one is still on the table, but mayor Kriseman has said he doesn’t favor that route. The public meetings are an attempt to appease residents who voted down a previous design called the Lens and complained there wasn’t enough public input. Michael Whalen said the plan needs to cater to every demographic.

There are three more meetings. The next one is Thursday at Roberts Recreation Center from 6:30 p.m. – 8:00 p.m. The survey is also on the city’s website.