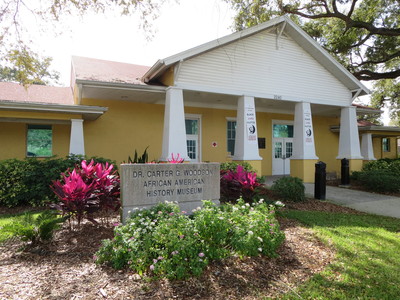 Some within St.Pete community are voicing their support for keeping city’s only African-American museum where it is now. Saturday at the Dr. Carter G. Woodson African-American museum backers filled the main room to listen to advocates explain why the museum’s location means so much. Museum board members, community activists and elected officials are focused on preserving the museum.

The museum is located near the intersection of 9th Avenue South and 22nd Street in St.Pete. It’s been a landmark in the black community for years; serving as such things as a civic center, meeting place, education center and venue for wedding ceremonies. Rene Flowers, Pinellas school board member and St. Pete native, told the crowd of the museum’s historical importance to her and others.

The drama around the sale of the museum property reached a fever pitch last week. The housing authority voted to sell the building which quickly prompted the Mayor to pull his re-nomination of a board member who voted to sell the property. The museum has 6 months to vacate the building. People are trying to keep that from happening. The housing authority cited murky bookkeeping as a reason for the sale. Terri Lipsey Scott, the museum’s chair of the board, put those allegations to rest.

Another twist in the attempted fire sale of the museum property is the role of St. Petersburg College. In the museum’s botanical gardens St. Pete City council member, Steve Kornell, thinks a well defined plan that includes the college is a good idea.

Theresa Lassiter is a community activist known as “Momma Tee”. She has seen the reclamation of her neighborhood before, like I-275 running through 22nd Street and the building of Tropicana Field. She views the museum as a potential oasis for everyone in St Pete.

The museum board intends to challenge the housing authority. A pro bono legal team is forming but can’t comment on any details until the museum officially retains them.