Activists in Tampa and St. Petersburg joined in a series of protests across the world Tuesday against the Dakota Access pipeline; a hundred people marched along downtown St. Petersburg’s Central Avenue at lunchtime. They held signs and chanted their opposition to the DAPL – the Dakota Access pipeline being built on tribal lands in North Dakota to transport fossil fuels.

Liza Epstein is concerned that the oil pipeline will leak and destroy water resources. 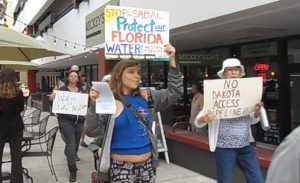 “Well, I feel like, even more important for Florida is to focus on what’s happening on our ground, on our land. The Sabal pipeline, which is a 516-mile long pipeline that’s going through 60% of our water in our aquifer. So, it’s going to affect 60% of our drinking water.

“This matters to me, because, I care about all of our population here. I care that we have clean water. The fact is, the pipeline is already leaking in Georgia, so this matters.” 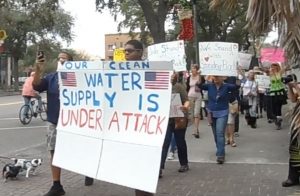 The leak in Georgia, you know they told the regulators that everything would be fine, but, then they drilled in and there was a leak.

“All I know is that it’s seeping in and that they are– that it’s affecting Georgia. But, I know it’s in their drinking water.”

There is also a protest going on in north Florida against the Sabal Trail. There were 14 people arrested over the weekend. What happened in the arrests and what’s happening to them now?

“I know that people who were being peaceful, but, putting their bodies in the line of their business, they were the ones who were arrested. I have heard that there are people who have been accused of being aggressive, that haven’t been aggressive and they are just arresting them”

You are going up to a hearing, on Tuesday, is it?

“Yes. In Citrus Springs there’s a hearing inside a church that’s supposed to be hearing about how close they’re putting it to schools. We are there rooting it. I know the Sierra Club and other organizations are suing because they didn’t do a Full Climate Impact report and they didn’t do a full ‘saying what it is that’s going to affect us’ report. So, they want that.

WMNF spoke with one protester, Larry Tharson of Miami Beach, as he walked past businesses and people eating lunch at tables on the sidewalk.

What are you doing in St. Petersburg?

“Visiting a friend who wants to demonstrate today and I agree, entirely, with the goal here. Let’s stop this pipeline!”

How, though, would a pipeline in North Dakota affect Miami Beach?

“It’s all of us, together. There’s demonstrations all around the country and this is the time to try to stop a project with national significance. Everybody needs to get behind it.” 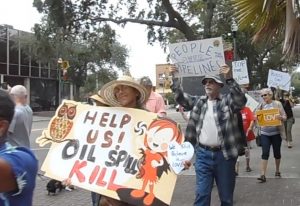 What is it about the pipeline that you oppose?

“It’s basically taking the carbon out of the earth, where it should be resting, for a long time, otherwise, it’s going to be killing our environment, down the line. It’s everybody who’s affected by this.”

Megan Weeks is a local activist in St. Petersburg.

“I’m here to stand with Standing Rock. I’ve been following this movement, since it’s origin in April and they’ve been through a lot. They need all the support that they can get, from every corner of the nation. I’m honored to be here, as one small city in this huge fight for water, for life. It’s that vital.” 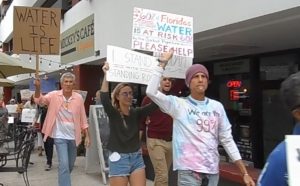 What are some of the chants you’re hearing? Right now we hear “Water is Life.” What else?

What is the connection, then, between the water–people are saying “Water is Life”–and this pipeline that’s for oil?

“Right. So, crude oil is going to be pumped over 500-miles through this pipeline, under the Missouri river, which is a major water source for many states. The idea of building this pipeline under that river is preposterous. The chances for leakage are definite. Eventually it will happen. It’s happening, right now, with current pipelines and we can’t risk it.”