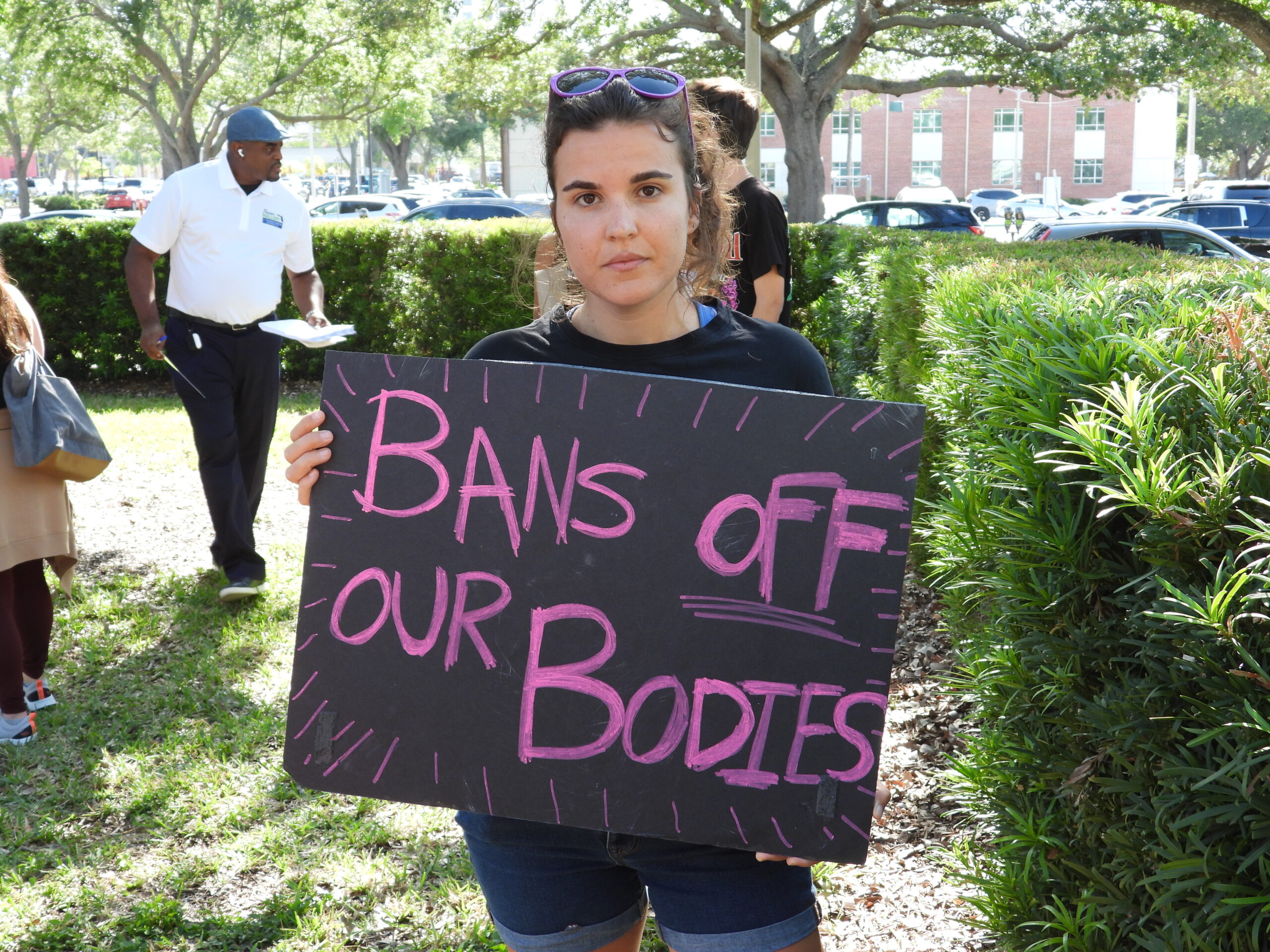 Update 11/03/2022: Discussion of these two proposals has been delayed one week, due to the COVID-related absence of St. Pete council member Richie Floyd during council’s regular meeting on Nov. 3.

Following the lead of other U.S. cities, city leaders of St. Petersburg, Florida will consider two proposals on Thursday that would signal support for protecting access to abortion care, amid growing concerns from Florida Democrats of a complete abortion ban.

One proposal up for discussion is a resolution, similar to one recently approved in Tampa and other U.S. cities, that would discourage the criminalization of those who seek or provide abortion in the city. The other proposal requests that the city provide “economic assistance” to the Tampa Bay Abortion Fund, a local nonprofit that provides financial assistance to pregnant people seeking safe and legal abortion care.

Both proposals, put forth by first-term St. Petersburg City Council member Richie Floyd, come in response to Florida’s 15-week abortion ban signed into law by Gov. Ron DeSantis in April and a decision by the U.S. Supreme Court in June that effectively ended the federal constitutional right to abortion.

Since then, advocates across the country have organized to protect abortion access, particularly for those who face greater financial or logistical barriers to that care, and to codify abortion rights. Some city leaders in various municipalities have also stepped in to signal their support for protecting abortion rights of residents.

Locally, members of Tampa City Council passed a non-binding resolution in August, not without its controversy, that affirmed support for the right of Tampa residents to make reproductive healthcare decisions, and discourages the use of funds by city departments to effectively criminalize or interfere with the reproductive healthcare decisions of Tampa residents.

“As of right now, reproductive health care is under attack in this country,” said council member Richie Floyd, in an interview with WMNF. “I think it’s really important that the city shows that we don’t support that, and we want to make sure that people can overcome hurdles to getting reproductive healthcare.”

In 2020, St. Petersburg City Council passed a similar resolution affirming support for reproductive healthcare access. But Floyd, first elected to office last November, argued this new resolution would go a step further by stating that the city does not intend to use any city money to keep track of healthcare decisions, to document them, or to use that information for the criminalization of healthcare decisions.

“I’ve been working on this for a long time and trying to find out what the most strong message we can send as a city was legally in the state,” said Floyd, who confirmed he’s been in contact with reproductive justice advocates to discuss the issue. “It did take a while for me to come to the conclusion of what was legally possible and build support for it,” he added.

The city of Atlanta approved a $300,000 donation to a national abortion fund in August, less than two months after the overturning of Roe v. Wade through the Dobbs decision. The city of Bloomington, Alabama also recently committed $200,000 in reproductive healthcare grants to nonprofits that assist residents in accessing abortion care, provided they don’t violate state or federal law.

And the mayor of Philadelphia announced a $500,000 city donation in August to a local abortion fund, framing it was a way for the city to show support for the fundamental right of its residents to bodily autonomy.

“Abortion is healthcare no matter where you live,” said Philadelphia mayor Jim Kenney. “Providing financial support for people seeking abortions is one of the ways we will support Philadelphians in their fundamental right to bodily autonomy. Even before the Supreme Court’s decision this year, anti-abortion restrictions have made it far too difficult for people to access safe and often life-saving procedures, because public insurance won’t cover it and the costs of the procedure—to say nothing of traveling to a clinic, taking time off from work, childcare, and other financial considerations—are prohibitive.”

Anti-abortion conservatives filed a lawsuit against the city of Philadelphia for that donation, but that legal challenge has been unsuccessful. An attorney for the ACLU of Pennsylvania said the suit had “no grounding in actual law.” 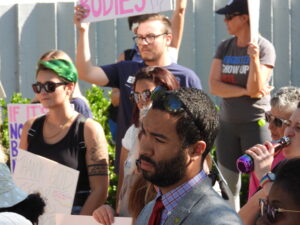 Floyd said, although he expects a “reactionary viewpoint” from the public to challenge the use of public funds to support reproductive healthcare access, he says that in St. Petersburg, a donation to the nonprofit Tampa Bay Abortion Fund would be legally sound.

“We’re perfectly within our legal bounds to do this. If someone wants to cause an issue about it, you know, that’s on them,” said Floyd. “They’re going to be wasting their time and money, in my opinion.”

The second proposal to donate to the abortion fund may be a tougher sell for city council compared to the resolution up for discussion Thursday. But Floyd, a democratic socialist and former teacher who’s been clear about his leftist positions on social and economic issues since the campaign trail, still hopes that both proposals will gain the support of his fellow council members.

“State funds, government funds are going towards the criminalization of abortion, and we can’t really do much to stop that,” Floyd admitted. “But what we can do is donate city money to help people get the reproductive health care that they need in a legal way, and overcome the logistic hurdles and make sure that less people are criminalized.”

A volunteer and board member of the Tampa Bay Abortion Fund confirmed to WMNF they’ve seen an uptick in people calling their organization, asking for financial assistance since Florida’s new abortion law went into effect earlier this year. 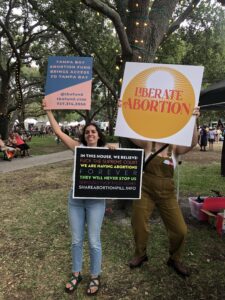 Volunteers of the Tampa Bay Abortion Fund at St. Petersburg Pride on June 25, 2022. By McKenna Schueler.

“Abortion bans like Florida’s 15-week ban, which went into effect on July 1, push care further out of reach for people working to make ends meet, said McKenna Kelley, on behalf of the organization’s leadership. “Tampa Bay Abortion Fund (TBAF) has been working to support people seeking abortion care with dignity and respect, despite anti-abortion politicians’ interference. We could not do what we do without the support of our community and local officials.”

From the beginning of July to the end of October, the abortion fund pledged financial assistance to 311 people who’d called seeking their financial assistance for an abortion procedure, or associated costs, like transportation for those who have to travel to find care. On average, they pledge $340 to $360 for the appointment itself. But when a caller has to travel out of state, that can range from $1200 up to $2000.

The volunteer-driven, nonpartisan organization also works with other abortion funds in Florida and national organizations that that help fund and coordinate abortions and practical support. The local fund work with both abortion care clinics in St. Petersburg, where they’ve pledged $6,775 to appointments at those clinics, according to Kelley, within the same July to October timeframe.

“We need bold action from local leaders to help ensure everyone has access to the abortion care they need,” said Kelley. “Cities play an important role in ensuring their residents have the freedom to control their reproductive and sexual lives.”