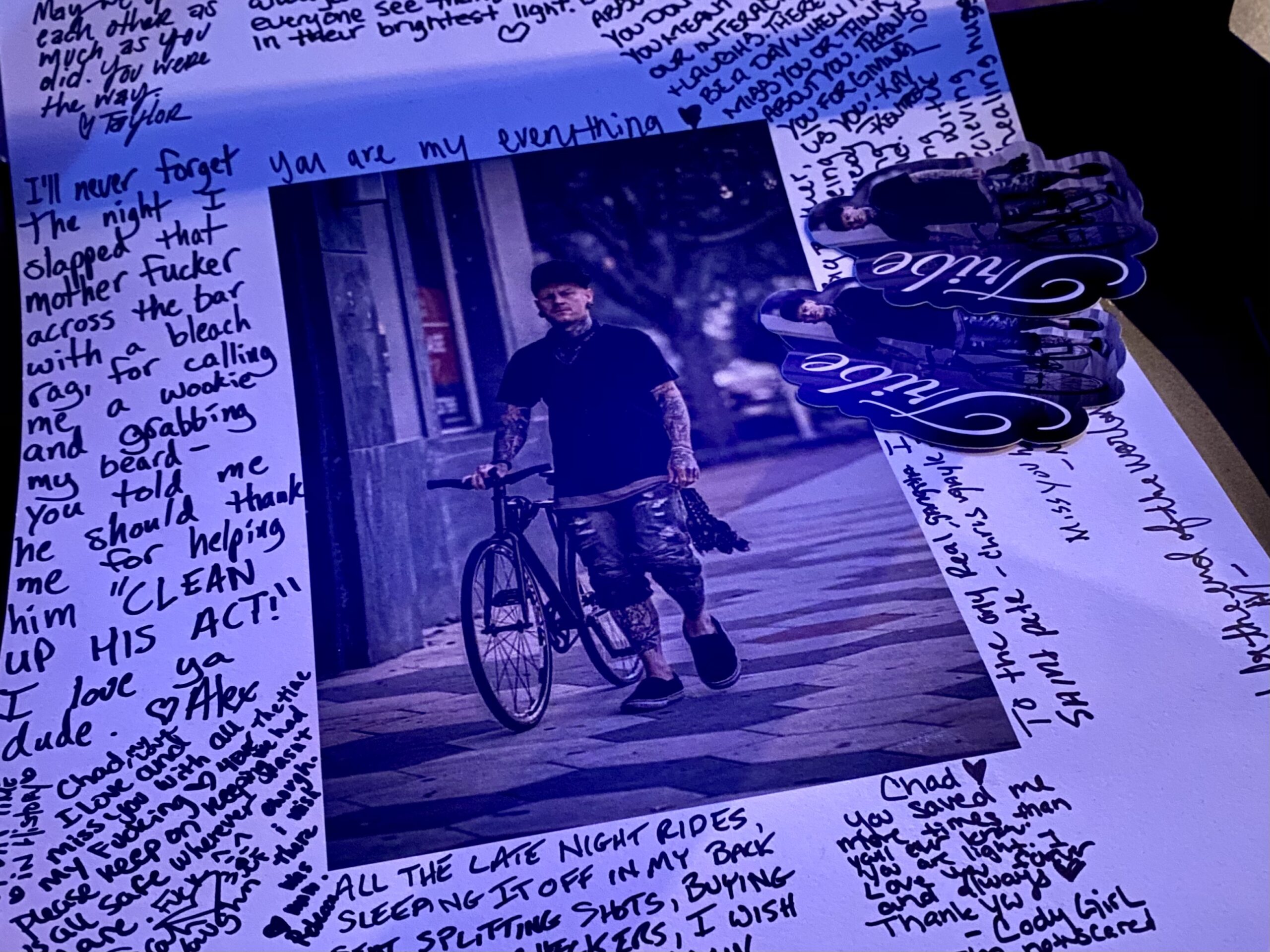 A number of bars and restaurants in downtown St. Petersburg this week are holding fundraisers to honor the life of Chad Bennett, a bicyclist who was killed in a crash last month.

Bennett was a well-known and loved figure in a community that’s figuring out how to move on without him.

Tonight this seat will be reserved.

Though, the man for whom these drinks await will not arrive.

Condensation will slip down the side of a clear, 16 oz. Dixie Cup. It will travel down the step-ridged center onto a paper napkin below until a small puddle forms on top of the bar.

Beside it, the candy cane aroma of a one-and-a-half ounce pour of Rumplemintz peppermint schnapps will linger with longing for those who knew him.

Bennett died at Bayfront hospital in the early morning hours of Nov. 29. He was hit by a car while riding his bicycle through the intersection of First Avenue North and Second Street. The accident is still under investigation.

Ami Shue worked with Bennett at Cider Press Café. They had known each other for years.

“I have never seen an incident completely paralyze a community,” Shue said. “We were absolutely rocked.”

In the hours after his death, social media was flooded with tributes to Bennett from friends and businesses alike. Pizza Box, the Bends, Cider Press and more all posted photos and tributes to their social media pages. Cider Press opened late that Sunday and Blue Goose didn’t open at all.

The shock of the loss was too great.

Tara Frenck was Bennett’s friend for more than 15 years.

“I don’t know if I’ve accepted the reality that he’s gone,” she said. “He was our Spartan. He was our tribe leader.”

Shue has helped organize a fundraiser for Bennett’s Family at Cider Press involving his favorite burger. It runs through Saturday.

“We are taking the profits from that burger all this week and donating it to his family.”

The restaurant is also accepting donations in person and on their website. A bar crawl will start at the Blue Goose Sunday at 1 p.m. and hit a few of Bennetts’s favorite bars, ending with a fundraiser raffle at One Night Stand.

In the days since Bennett’s death, bars have put reserved signs and drinks out for him.

Stools have gone up across the city to save him a place.

John Colby said his friendship with Bennett was immediate. He, like many others, felt an instant connection.

“I’ve always felt safe around Chad and I started feeling like that before I even knew much about Chad. We were hugs and I love you friends before we were like ‘hey, so where’s your family from.’”

Throughout the city Bennett formed a tribe. His own circle. His own family. Frenck said he brought a community together.

People who knew him, like Ben Harris, said that once you were among the tribe, Bennett was part brother, part protector, part grief counselor and always there.

“Rather than see someone he cared about hurt, in a bad situation, or in pain, he would prefer to be the one to take that on. Whether or not he needed to,  whether or not it was necessary, he was the guy you could rely on to keep you out of bad situations. Even if it meant putting himself in the middle of it.”

A walking piece of art

Shue said some of Bennett’s love and loyalty came from his own pain and personal tragedy.

“I think we all have that little pain that we’ve taken throughout our lives and we’ve molded and grown from it,” she said. “But he turned it into a beautiful piece of art. He was a walking piece of art. And he had a way of expressing himself that no one else had. We love him and miss him terribly.”

So, tonight this seat will be reserved. The man for whom these drinks await will not arrive.

But, for many across St. Pete, he will never leave.