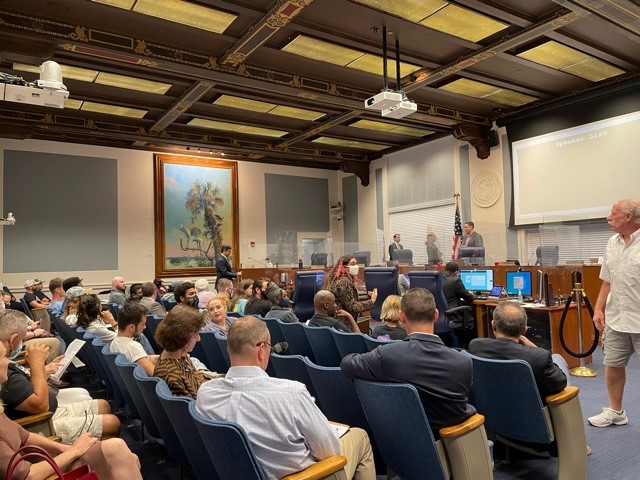 Tangela Butler, a local bus driver, approached one of two podiums in the meeting room of St. Petersburg City Hall on Monday night. Dozens of community members sat in the pews behind her. She had no speech prepared. No notes. Just a heavy, but determined heart, and a plea for city leaders to take action on the city’s housing crisis.

A bus driver of 19 years for the Pinellas County school district, Butler was one of nearly two dozen community members who gave public comment at St. Pete City Hall on Monday night, as part of a public budget meeting to discuss the city’s spending for the next fiscal year, which begins October 1.

While residents brought up a handful of topics – ranging from community violence intervention, to ADA compliance, to safe sidewalks and public safety funding – housing was the number one issue voiced by locals.

As the St. Pete Catalyst reports, thousands of children in Pinellas County are estimated to be homeless. Earlier this year, the county school district counted just over 3,500 students who were homeless. Dr. Christine Cantrell, a homeless liaison for the school district, told the Catalyst she expected there could be 4,000 or more by the end of the school year.

Butler told members of St. Pete City Council and Mayor Ken Welch on Monday that she had faced homelessness herself last year, after her landlord decided to sell her home. Scrambling to find a place to live, Butler eventually found a rental situation. But she’s now paying $500 more a month.

‘We have a massive market failure’

James Trimarco, another attendee at the meeting, shared Butler’s concerns. He said, while the Tampa Bay region has seen some of the highest rent spikes in the nation, wages for everyday working people aren’t keeping up. “There is no giant 39% increase in wages here,” said Trimarco. “And so you know, that puts the residents, especially the long-term residents of the city, in a very difficult place where they are facing displacement.”

Local activist groups, including the St. Pete Tenants Union and the People’s Council, mobilized locals to come out to the meeting — the city’s first public budget forum of the year — to discuss the city’s budget for the fiscal year of 2023, and to share their priorities.

Investing in a social housing pilot program, and a guaranteed right to legal representation for tenants facing eviction, were two calls to action voiced by activists.

“I’ve never seen in my lifetime such a massive situation – what’s known by economists, it’s called – basically, market failure. And market failure is when the private markets fail to deliver some urgent need, or some need for people,” said Bruce Nissen, a retired labor studies professor and community activist. “We have a massive market failure right now in the area of housing, there’s just no other way to look at it.”

Karla Correa of the St. Pete Tenants Union was also at the meeting. Although the city has earmarked millions of dollars to address the city’s housing crisis, which will in part support the development of affordable housing projects, the solutions proposed by city leaders, she said, are insufficient to address the immediate need of housing unaffordability.

“What ‘affordable housing’ is, it’s really just you know, public subsidies for a developer to permanently profit off of it. So it’s a bad deal for us taxpayers,” said Correa. “We need for the thousands of vacant units in our city to be expropriated and taken off the speculative real estate markets, to keep them permanently affordable. Housing is a human right and we must turn away from the pro-business, market solutions to housing that are being offered by the Welch administration, and towards ones that empower working class people.”

According to a recent study by the Harvard Kennedy School, nearly half of renters in St. Petersburg are cost-burdened, meaning they spend 30% or more of their income on housing. An estimated 23% spend more than half.

According to figures detailed in city documents, that’s roughly 1% of the total preliminary operating funds. An additional $2.1 million is allocated in the budget for organizations in the community that provide homelessness resources. Within the city’s capital improvement plan (CIP) budget, there is $8.5 million in Penny for Pinellas funding for affordable housing land acquisition over the five-year plan.

Housing is one of five priorities, or ‘pillars for progress,’ highlighted by the Welch administration to guide city spending over the next year. Other key pillars include the environment, infrastructure, and resilience; equitable development; education and youth opportunities; and neighborhood health and safety.

“Our funding allocations represent our administration’s and the City Council’s commitment to ensuring that we meet the needs of all constituents, regardless of their economic status, to ensure housing opportunities for all,” said Mayor Welch, at the top of the open forum on Monday. “The budget is a work in progress, and we are balancing unlimited needs with finite resources. But through dialogue, collaboration and consensus, we will build a budget that reflects the needs of our entire community.”

Following public comment, which lasted well over an hour, Welch reiterated this commitment. And added that he wants to hear more about the public’s specific ideas for what the city could do to address the ongoing housing crisis, including proposed ideas of social housing and a fully-funded, universal right to counsel program.

“Look, I’m agnostic about where good ideas come from,” Welch said plainly. “If you’ve got an idea that moves us forward, I want to hear about it. And I will, you know, tell you when I disagree on something.”

Several City Council members, including Brandi Gabbard, Ed Montanari, and Richie Floyd, echoed a similar sentiment, and encouraged members of the public to contact them directly if locals had ideas they’d be open to discussing one-on-one. “What matters is that we’re having an open dialogue,” said Gabbard.

A right-to-counsel policy in St. Pete – which could help keep tenants in their homes – is expected to be discussed next month. The city will hold additional public hearings on the FY2023 budget on September 15 and September 29, 2022. And the new budget will be effective October 1, 2022.