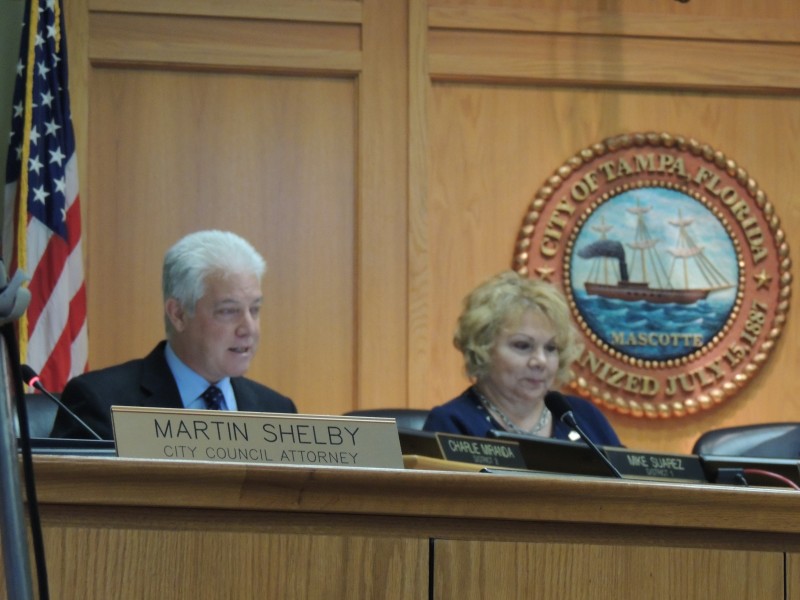 It took fourteen contentious rounds of voting – and even accusations of a menacing gesture – but Tampa City Council now has a new chair: Mike Suarez. The vote matters because if Mayor Bob Buckhorn does not complete the remaining 3 years of his term the City Council chair becomes interim Mayor. The first thirteen votes were deadlocked with two council members supporting Suarez, two supporting Harry Cohen and three supporting Frank Reddick. Council then decided to vote first for a vice chair – called a Chair Pro Tem – who could run the meeting, and to resume the votes later.

Council member Lisa Montelione nominated herself as vice chair because she will soon leave Council to run for State House. But then in a surprising turn Cohen accepted a nomination for Chair Pro Tem, which would mean he could not be Chair.

“All in favor of Harry Cohen, please raise your hand. That’s a majority. Mr. Cohen would you like to say a few words?”

“Yes. By doing that – by not declining that nomination, I hope I’ve broken the impasse that existed between the candidates for chair.”

The remaining two candidates were nominated for chair. But the contentious meeting became even stormier when Reddick accused the head of the police union of making a throat-slashing gesture when his name was mentioned.

“May I say something before we move forward? Because I just witnessed someone sitting out in the audience. And I’m ashamed that he would do this. And that’s ‘Mr. Vinny,’ the PBA President. Will you do this [makes throat-slashing gesture]? When my name was mentioned, you did this [makes throat-slashing gesture]. And don’t sit here and lie, because we can play the camera back. You just did it. Now, that’s shameful that you – in your profession – that you would do something like that. So, I just wanted to say that, because I sat here and observed you do this, okay? And don’t deny it, because it did happen.”

Reddick was referring to the head of the Police Benevolent Association, Vincent Gericitano. The two have butted heads on police accountability. Reddick, who is the only black council member, wants much stronger citizen oversight over police – in part because of a disproportionate number of stops, citations or arrests of black residents in Tampa. In contrast, the police union says there already is enough oversight. In addition, Gericitano told the Tampa Bay Times he did not make a menacing gesture at Reddick.

The fourteenth and final vote came down to Reddick versus Suarez – who won after picking up the votes Cohen had been getting.

“Closing on Mike Suarez and Frank Reddick. All in favor of Mike Suarez, please raise your hand. Okay. That’s a majority and Mr. Suarez, would you like to say a few words?”

“Thank you very much, colleagues. I know this was a lot more work than we have done in the past for chair. I appreciate the support that I’ve gotten. First time that I’ve ever been nominated for Chairman and I appreciate what Mr. Reddick and Mr. Cohen have said.

“Mr. Reddick served well as the Chair as did our previous Chair Mr. Miranda. And thank you all very much. And I think that we’ll – let’s put this behind us and let’s go forward with the meeting and do the business of the people.”

Next year’s vote for chair could end up being even more divisive since it will be closer to the time Mayor Bob Buckhorn will need to decide whether he will leave office, for example to run for governor in 2018 or to work in the White House should Hillary Clinton win in November.